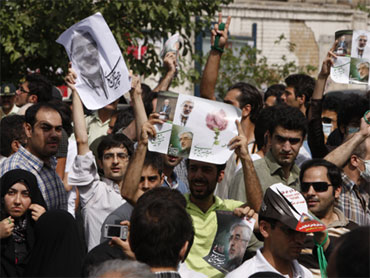 Two of Iran's top pro-reform figures said police used excessive force against anti-government protesters who took to the streets last week on the sidelines of state-sanctioned rallies to mark the 30th anniversary of the U.S. Embassy takeover.

Mir Hossein Mousavi and Mahdi Karroubi, who lead the protest movement rejecting the legitimacy of President Mahmoud Ahmadinejad's June re-election, said authorities wielding batons even struck women on their heads. They called such treatment an ugly act that was not even seen during Shah Mohammad Reza Pahlavi's response to the 1979 Islamic revolution that toppled him.

"I can't understand why they should treat people like this," Karroubi was quoted as saying by several opposition Web sites. "... I struggled against the Pahlavi regime for 15 years ... but there were no such crackdowns."

Such Web statements have been the mainstay of an opposition movement struggling to stay alive despite being brutally swept off the streets in the weeks after the June 12 election. Mousavi and his supporters contend that he was the rightful winner of the vote, but that Ahmadinejad was fraudulently declared the winner.

In a clear effort to silence the opposition's Internet outlet, Iranian authorities announced they were deploying a special police unit to sweep Web sites for political material and prosecute those deemed to be spreading lies, Iranian media reported Saturday.

Most opposition Web sites are already banned, but activists have continued to set up new sites within days of the old ones being blocked.

The new 12-member police unit will report to the prosecutor's office. Police Col. Mehrdad Omidi, who heads the unit, said it will go after "insults and the spreading of lies," terms widely used by the judiciary to describe opposition activities.

"Authorities know that the Internet is one of the few available channels for the opposition to make its voice heard. They want to silence opposition voices," said reform-minded journalist Akbar Montajabi, who described the measure as the latest set of restrictions imposed on media in the country.

Iran also pushed ahead Saturday with another key component in its battle with the opposition, sentencing a student activist to eight years in prison, according to the pro-opposition Web site Mowjcamp. More than 100 activists and some senior pro-reform figures have been on trial since August on charges of participating in rallies and plotting to overthrow the country's clerical rulers.

In Saturday's Web statement, Mousavi said the government's crackdown in the streets and on media won't stop Iranians from demanding civil and political freedoms and democracy.

"We want political prisoners to be released," Mousavi said. "We want guarantees for healthy elections. We want freedom of the press and speech. ... Islam is the religion of logic, not the religion of breaking pens and mass closures of newspapers."

Mousavi and Karroubi touched on an extremely sensitive point in their comments likening the government to the shah's regime.

Iran's Islamic leadership has repeatedly denounced the U.S.-backed shah's rule as dictatorial and brutal. In some cases, the shah's forces opened fire on crowds of demonstrators and many political prisoners said they suffered extensive torture in prisons.

Now, political activists say the treatment of detainees is even harsher. Karroubi has even said he has received information that detained protesters - men and women - have been savagely raped by their jailers to the point of physical and mental damage.

The opposition says at least 72 protesters were killed in the postelection meltdown. The government puts the number of confirmed dead at 30.

Media restrictions kept reporters from witnessing the scenes in the streets, and the mass trial of opposition figures has deprived the movement of potential leaders.

The opposition's presence on the Internet, however, kept a spotlight on the crackdown for weeks after the June vote, as Web users posted minute-by-minute updates and amateur video on sites like Twitter and Facebook.

Revolutionary Guard chief Gen. Mohammad Ali Jafari, whose forces were the most potent weapon in crushing the massive protests, said Saturday that Supreme Leader Ayatollah Ali Khamenei praised the Guard for "putting an end to sedition," according to the official IRNA news agency.

The student activist sentenced to jail on Saturday, Abdollah Momeni, was convicted of acts against the security of Iran and of participating in protests, the Mowjcamp opposition site reported.

The Web site quoted his wife, Fatemeh Adinehvand, as saying that the sentence was unjust and denying that Momeni ever joined any of the street protests.

Momeni was the spokesman for a university student organization called the Office for Fostering Unity. He was arrested on June 21 at the campaign headquarters of Karroubi, who also ran for president in June.