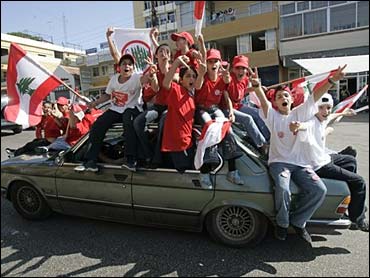 The anti-Syrian opposition captured control of Lebanon's parliament Monday, breaking Damascus' long domination of the country, after the opposition candidates swept all seats in the final round of the elections, according to unofficial results.

Opposition leader Saad Hariri's slate won all seats in the north, guaranteeing a majority in parliament, said one of his campaign officials, who spoke on condition of anonymity. A pro-Syrian leader, former Interior Minister Suleiman Franjieh, said earlier Monday that the opposition had triumphed in Sunday's polls in north Lebanon, the last round of the staggered elections.

Men, women and children waved flags and danced in the streets of Tripoli, the provincial capital of the north, as news of the opposition victory spread. In Beirut, the national capital, opposition supporters drove through the city, cheering and honking in celebration.

The anouncement of official results by the Interior Ministry was delayed as the counting took longer than expected.

The election was marred by vote-buying and other shortcomings. The head of the European Union observers, Jose Ignacio Salafranca, said his team of about 100 personnel had "directly witnessed a few attempts at vote-buying" in the three previous rounds of voting. He also said the electoral system needs "a very serious reform to be closer to the democratic standards."

The buying of votes was a "very serious concern" for the EU team, Salafranca said.

President Emile Lahoud called on the new parliament Monday to reform the electoral law to "put an end to vote-buying and give an equal opportunity to all candidates."

The opposition's victory capped four months of political upheaval since the Feb. 14 assassination of former Prime Minister Rafik Hariri. The killing provoked mass demonstrations against Syria which, backed by U.N. and U.S. pressure, led to Damascus's withdrawing all its troops from Lebanon by late April, ending 29 years of military and political dominance.

The opposition blamed Syria and pro-Syrian elements in the Lebanese security services for blowing up Hariri's motorcade, killing him and 20 others on a Beirut street. Syria denied involvement.

The new parliament will face the challenge of healing Lebanon's long standing divisions, as well as new sectarian tensions that arose during the campaign.

"What happened is a hurricane that aims at destroying Lebanese unity, and this is the danger facing us all and we must avoid," said Mikhail Daher, a former opposition legislator who was defeated by the main opposition alliance. Daher, a Christian blamed his loss in the mainly Muslim Akkar region on vote-buying and sectarian incitement by the Future Movement of Hariri, a Sunni Muslim.

Christian leader Michel Aoun, who broke with the anti-Syrian alliance to form his own list, said he would sit in opposition. "There's a dispute over values," he said of his rivals.

The parliament also will elect a new speaker and nominate a new prime minister. The outgoing speaker and premier are pro-Syrians.

The new government will have to tackle Lebanon's heavy debt, co-operate with a U.N. investigation into the Hariri assassination, and work out how to approach a deeply divisive call from the U.N. Security Council for Lebanon to disarm its militias — a reference to the Hezbollah group, which enjoys strong electoral support and wide respect among Lebanese for its campaign against Israel.

The new Cabinet will also have to reshape Lebanon's relationship with Syria, the big neighbor to the east.

Prime Minister Najib Mikati's government is expected to move into a caretaker capacity on Monday night as the outgoing parliament's mandate ends.

The election was bitterly fought, with rival candidates accusing each other of vote-buying and incitement.

The all-too rare Christian-Muslim solidarity that emerged after Hariri's assassination disintegrated during the campaign. The final round was particulary marred by sectarian appeals as both sides sought to mobilize their supporters.