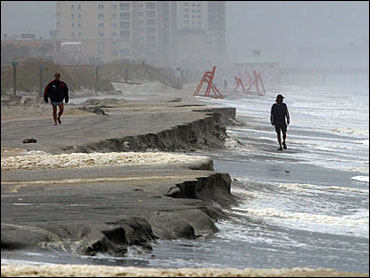 Tropical Storm Ophelia moved away from Florida's northeast coast Friday, but that may not be the end of it for the peninsula, Georgia or the Carolinas.

"By no means should people take this short-term motion as being let off the hook here," National Hurricane Center meteorologist Jamie Rhome said. "I don't want people to say, 'Whew this one's going out to sea.' There's still a possibility that it could loop back."

Ophelia was about 130 miles east of Daytona Beach and moving north-northeast at 5 mph. Tropical storm warnings were dropped for the north-central Florida coast. The storm had briefly been a hurricane Thursday.

"It looks like the storm will move a little to the north and east over the next couple of days, but may make an actual loop and end up back to where it is now, let's say by early next week, so the path is very uncertain, and so is the intensity," said CBS News meteorologist George Cullen.

Florida has been struck by two hurricanes this year and six in 13 months. Many residents who learned from previous experiences have stocked up on batteries, water and nonperishable food.

"These people around here are veterans. They are already prepared," said Rick Storm, a clerk at a Wal-Mart Supercenter in Merritt Island. "They are fully stocked and ready to go."

Even as it lingered offshore, Ophelia sent waves crashing onto beaches and stirred up winds. Officials shut down a stretch of coastal road in Flagler County so transportation workers could shore it up with sand and boulders.

"The storm is eating up our dunes," county communications manager Carl Laundrie said. "It has cut up right next to the road."

Officials at NASA were also keeping an eye on Ophelia. Last summer, the space agency's launch and landing site took the brunt of three hurricanes, which punched big holes into the massive building where shuttles are attached to their booster rockets and fuel tanks.

Two other tropical storms, Nate and Maria, posed no threat to land as they weakened moving into cooler waters of the north Atlantic.