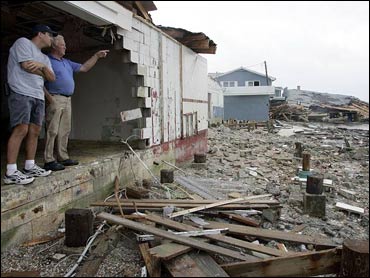 The snail-paced Ophelia, downgraded from hurricane to tropical storm, moved out to sea early Friday after a three-day drenching that was far less severe than many had anticipated.

Coastal residents to the south, where the storm's gusty wind ripped apart businesses and damaged homes, were hit hardest.

Ophelia ripped off the back of the restaurant and left chairs and tables floating in water. It's the sixth time in 30 years a storm has taken off that side of the restaurant, which looks out on Bogue Sound.

President Bush issued a state of emergency in 37 North Carolina counties to allow the Department of Homeland Security and FEMA to act quickly,

Bowers reports that FEMA staff waiting in North Carolina say their agency is being held under a microscope and they want to be seen as capable of providing a quick response. They say the way things are going along the Atlantic Coast, they'll likely get their chance.

While the storm's center is expected to stay just offshore, the ring of high wind surrounding the eye could remain over the Outer Banks until midday Friday, according to the National Hurricane Center.

Gov. Mike Easley says gauging the scope of the damage is difficult because of the storm's slow path, first affecting the state's southeastern coast on Tuesday and then crawling north and east Wednesday and Thursday.

Ophelia was downgraded to a tropical storm and its sustained winds dropped to 65 mph.

The mainland did not have the severe flooding many had feared could devastate the coastal interior.

"I've been coming down here for 25 years - this is nothing," said Tim Kifer, 51, of Chicago, who stopped by a marina in Manteo to check out the waters of Roanoke Sound.

A moment later, a jogger plodded by along the docks, seemingly oblivious to the hurricane swirling off the coast.

Farther north on the Outer Banks, most businesses remained open in Nags Head and Manteo and a few people braved intermittent rain squalls to shop or check out the surf.

David Goddard, 58, of Asbhurn, Va., said he was a bit disappointed in Ophelia.

"I'm a weather junkie," he said. "I thought it was gonna be worse than this."

Some decided to take advantage of the churning surf to have a little fun.

David Goddard, 58, of Ashburn, Virginia, stood on the beach in Nags Head, watching his 32-year-old son Josh wade into the foamy water up to his calves.

The storm is blamed for one traffic death. Earlier, a surfer disappeared in rough water off the coast of South Carolina.

On the Outer Banks, Dare County officials said Hatteras Island reported gusts to 95 mph. Other than power outages, the island is in pretty good shape, according to county spokeswoman Sharon Sullivan.

Ocean water is not expected to wash over the islands, although coastal storm surge flooding of 4-6 feet above normal tide is expected, along with large and battering waves.

Ophelia, an erratic storm that has looped and meandered north since forming off the Florida coast last week, stalled Thursday afternoon before drifting toward the east-northeast at about 3 mph.

Early Friday, Ophelia was centered about 55 miles southeast of Cape Hatteras, drifting north and expected to continue turning erratically out to sea.

A tropical storm watch is in effect for southeastern Massachusetts, including Cape Cod, Nantucket and Martha's Vineyard.