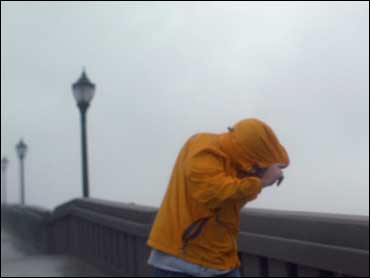 With the slow-moving storm expected to produce up to 15 inches of rain in places, Gov. Mike Easley told people to get out of the storm's path.

"If you have not heeded the warning before, let me be clear right now: Ophelia is a dangerous storm," the governor said from Raleigh, warning of storm surges that could reach 11 feet.

As it brushed the coast, Ophelia ripped away one barrier island street and chased emergency personnel to shelter. The storm had sustained wind of 85 mph Wednesday afternoon, according to the National Hurricane Center.

The governor urged people to leave flood-prone areas. "We're asking and begging them to do that because it's going to be hard to get them out later," he said. The storm's center was expected to make landfall Wednesday evening in Carteret County, at the corner of North Carolina's central coast.

CBS News Correspondent Cynthia Bowers reports that in coastal communities, Ophelia is already being likened to Hurricane Floyd, which came ashore six years ago this week as a Category 2. It packed 100-plus mph winds, but it was the 20 inches of rain it dumped inland that got the blame for 56 deaths.

Hurricane warnings covered the entire North Carolina coast from the South Carolina line to Virginia, where a tropical storm warning covered the mouth of Chesapeake Bay.

"A lot of people opened their eyes to the devastation these storms can do," Snyder said.

Ophelia was moving northeastward at just 7 mph after following a looping, meandering course along the coast since it formed off Florida.

Authorities expected the storm's passage across North Carolina to take some 48 hours from the start of rainfall on the southeastern coast Tuesday afternoon to the storm's anticipated exit off the Outer Banks and back into the Atlantic late Thursday.

By mid-afternoon Wednesday, about 12 inches of rain had fallen on Oak Island at the mouth of the Cape Fear River, said meteorologist Jeff Orrock with the National Weather Service in Raleigh.

Following the criticism of its response to Hurricane Katrina, the Federal Emergency Management Agency had 250 workers on the ground, a larger-than-usual contingent given Ophelia's size. FEMA also put Coast Guard Rear Adm. Brian Peterman in command of any federal response the storm may require.

The governor said he had spoken to Homeland Security chief Michael Chertoff and that National Guard teams were prepared to evacuate sick, frail and elderly residents.

In coastal Craven County, Jetnella Gibbs of Beaufort and her family went to a shelter after the rain started Tuesday.

"We noticed the street was starting to fill up, and I said 'It's time to go,"' she said. "I know if this little bit here has flooded the street, what will it do when it really pours?"

On Ocean Isle Beach, a 50-foot section of beachfront road was washed out by heavy surf and the only bridge to the barrier island was closed. Police had evacuated to an off-island safe house on Tuesday.

Evacuations had been ordered along parts of the exposed Outer Banks islands. In the Pamlico Sound area, officials worried about flooding in locations that were devastated by high water after previous storms.

At 5 p.m. EDT, Ophelia's large eye was centered about 40 miles east of Wilmington and about 50 miles southwest of Cape Lookout on the Outer Banks. Hurricane-force wind of at least 74 mph extended 50 miles out from the center and forecasters said some strengthening was possible.

Residents of the Outer Banks were warned that Ophelia could bring 10 hours of hurricane-force wind to exposed Hatteras Island, especially the southernmost villages of Hatteras, Frisco and Buxton.

"It's an island. The water will come over, it'll go out, and we'll do it all over again," said lifelong Buxton resident Tiffany Bigham, 27, after she'd finished boarding up her living room windows. She planned to ride out the storm along with family and friends.

"You grow up knowing it's a part of life" she said.