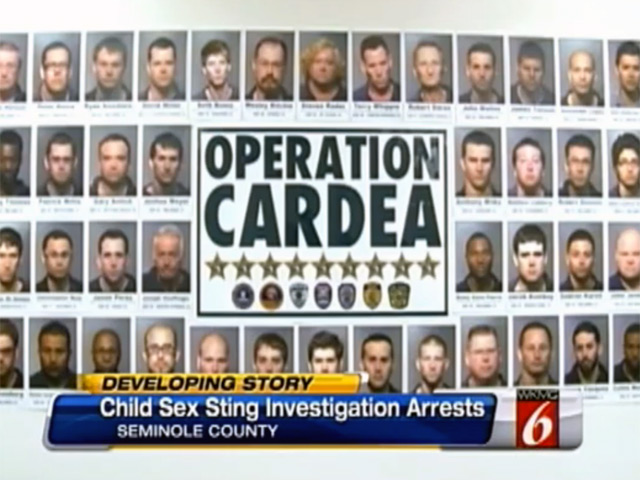 (CBS) -- Authorities arrested 50 people, including teachers and school employees, this past week as part of an undercover child-sex sting in central Florida, CBS affiliate WKMG reports.

"Operation Cardea," named after a Roman goddess who protected homes, involved police officers posing online as teens and parents as they chatted with people who use the Internet to sexually exploit children, the station reports.

Authorities said 200 investigators worked with more than a dozen law enforcement agencies, including the FBI and FDLE, to make the arrests, according to Fox News.

The suspects ranged from 19 to 60 years old and included a local high school teacher, a tourist visiting from Turkey, college students and out-of-state residents, WKMG reports.

The Seminole County Sheriff's Office said suspects traveled from various cities in Florida to a home in Seminole County thinking they were going to have sex  with children as young as 11-years-old, WKMG reports. Deputies contacted the suspects on various websites, with some of the men posting on classified ads looking for sex.

When the 50 accused are released from Seminole County Jail on bond, they will be prohibited from having contact with children, according to WKMG.

At least two of the school employees have already resigned.