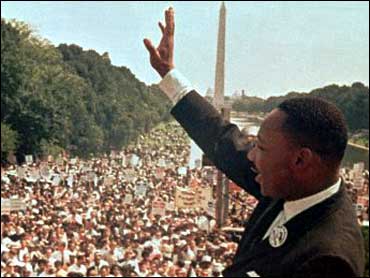 The Rev. Martin Luther King Jr. would have been 75 years old this year.

Thirty-six years after King's death, his daughter Yolanda continues to spread his message of love and brotherhood. The eldest of his four children, Yolanda King has published her first book, "Open My Eyes, Open My Soul: Celebrating Our Common Humanity."

The book is an anthology of stories and poems, collected and edited by Yolanda King and Elodia Tate, which provide an outlet for those published and unpublished writers whose experience in overcoming cultural, racial and religious differences has led to a renewed vision of humanity.

King tells The Early Show co-anchor Rene Syler, "They are real life stories of people having magical moments, important moments of discovery, when they realize a heart connection. They make some kind of real leap into this whole idea, this notion, that we're all one - a message that we can never hear enough."

Her father would be pleased about today's state of race relations in this country, King says. "More pleased than probably a lot of people would feel because there has been some real progress. There's been real growth, people building bridges across this country, across the planet, really, people coming together, whom 10 years ago, 15 years ago, during his lifetime, clearly were not working together. So I think he would be pleased about that. But the reality is, we've got far to go."

Muhammad Ali, Maya Angelou, Robert Kennedy Jr., Mattie Stepanek and Stevie Wonder are among those who contributed to the book. Coretta Scott King wrote the foreword.