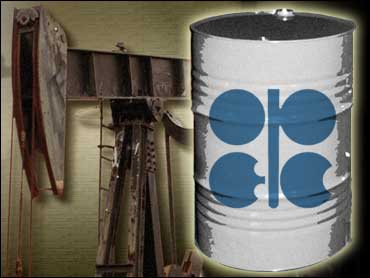 OPEC aims to boost its oil production capacity by at least 10 percent by the end of next year, in an effort to keep crude prices from rising further, the group's president said Thursday.

The Organization of Petroleum Exporting Countries is already pumping 2 million barrels a day above its output target of 25.5 million barrels, Purnomo Yusgiantoro told a news conference at OPEC's headquarters in Vienna. "That's partly because we are concerned with the price level that we see today," he said.

A robust demand for oil imports from China and refining bottlenecks in other major importing countries have fanned "unwarranted fears" about possible crude shortages.

To calm a nervous and sensitive market, OPEC members are investing in their oil fields and facilities to add between 2.5 million and 3.5 million barrels of daily production capacity by the end of 2005, he said.

Although oil-exporting countries are happy to maximize profits, OPEC and its de facto leader Saudi Arabia worry that global economic growth and the long-term demand for crude could suffer if prices soar higher.

Right now the average U.S. national price for regular-grade gasoline is around $1.93, reports CBS News Correspondent John Hartge. That's up a bit in the past couple weeks, after falling from the late spring highs that were well into the $2 range. Gas remains 40 cents a gallon more than it was a year ago, and Energy Department analysts do not expect any gasoline price break before the Labor Day holiday.

"We've seen very strong demand worldwide for petroleum at the same time that OPEC, until recently, was trying to hold back on production," said Ron Planting at the American Petroleum Institute.

But few analysts expect lower prices to last, noting production is already above quota and oil markets had already factored the output increase into prices.

"The increase itself has been telegraphed in the same fashion that dropping a brick on someone's toe gives a hint," said Jan Stuart of New York brokerage FIMAT USA.

OPEC agreed last month to make a two-step increase in its output ceiling to try to calm oil markets, which are jittery over pipeline attacks in Iraq and terrorism in Saudi Arabia.

Chronic strife in Venezuela and Nigeria, legal problems for Russia's biggest oil company Yukos, and recurring sabotage on pipelines in Iraq have added to fears of a shortage.

"The only stabilizer we've got left is Saudi Arabia. They're doing 100 percent of the work right now in keeping the oil market as stable as is possible," said Paul Horsnell of Barclays Capital in London.

Saudi Arabia, which now pumps around 9.1 million barrels a day, is the only producer with significant flexibility to pump more.