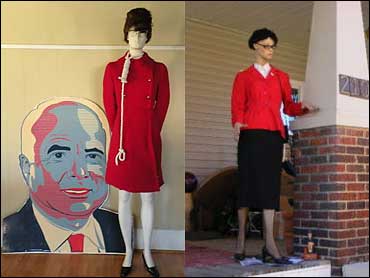 A Sarah Palin supporter won an eBay auction to own his very own mannequin of the Alaska governor and former vice presidential nominee.

According to the Los Angeles Times, it went for $2,247.22 when the auction ended Thursday.

However, the winner has now expressed buyer's remorse, after learning that the mannequin was actually the very same effigy that was

hung by a noose in front of a West Hollywood home last Halloween
.

Chad Michael Morrisette, a professional window dresser who created the Palin look-alike, said the buyer thought he was buying a pro-Palin item and didn't realize the truth until he heard about the auction on talk radio. He has now changed his mind.

The mannequin of Palin made headlines after Morrisette hung it from the roof as part of a Halloween display last October.

Morrisette hasn't said whether he will put the item back up for auction.

The mannequin was first listed on eBay with a photo depicting the noose, which prompted eBay to pull the listing last weekend; a new photo was posted sans neckwear.

Oddly, that isn't the only Palin-related mannequin up for sale. A Kentucky seller is seeking bids on a vintage 1960s store mannequin that was dressed up as Palin during the election, in what the seller describes as "a wonderful designer wardrobe purchased from Goodwill for $20. Her stockings came from Wal Mart for $5."

So far no bids have been placed, with the seller asking $299.

"I really hate to see her go but, thanks to her politician friends I need the money," the seller writes. 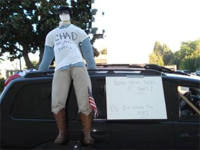 (eBay.com)
There is also a stuffed mannequin of Chad Michael Morrisette (left) that someone created in protest of the Halloween stunt, which is up for auction on eBay.

"When the Sara [sic] Palin mannequin went up, people went crazy!" writes the seller. "No one could make the guys who put it up, take it down. So I made my own "mannequin" of the guy who did Sara Palin's. … And wouldn't ya know it, he took his right down. THIS MANNEQUIN IS NOT ONLY HISTORY, BUT HE WILL HELP YOU DRIVE IN THE CAR POOL LANE! OWN IT TODAY!"