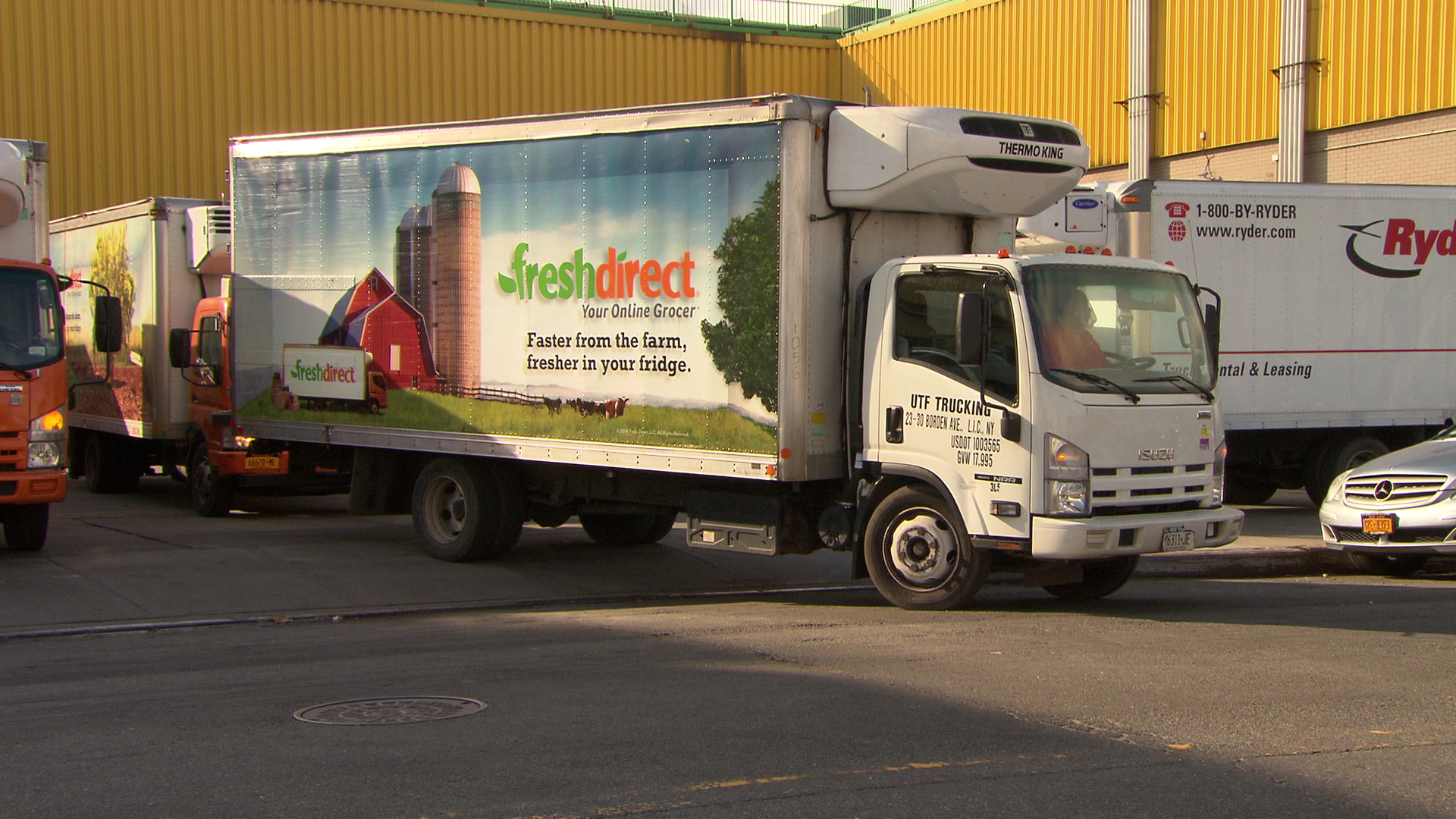 Giant retailers like Walmart and Amazon see groceries as the next frontier in e-commerce, and one food giant is taking the East Coast by storm. CBS News' Vinita Nair took an inside look at the online grocery service showing up at front doors for more than a decade.

At 6 a.m., FreshDirect drivers Ray Talovera and Jonathan Hedgespeth are making their way to New York City's West Side. All the groceries they're delivering were ordered by customers online; everything from paper towels and cases of bottled water to sushi-grade seafood and homemade pastries.

It's all prepped and processed at the company's 300,000-square-foot warehouse in Long Island City, New York. CEO Jason Ackerman co-founded the business 12 years ago.

"Even my own wife said, 'You know, hon, I'm not going to be buying from this because I'm going to pick out my own food,'" Ackerman said. "We had pretty much most people saying this was not something we could accomplish."

Now, he said, those critics have changed their opinion.

From the beginning, Ackerman said he had a different view of what an online grocery business should be. Rather than deliver groceries for an existing supermarket, he built FreshDirect independently, sourcing products directly from farms.

Co-founder David McInerny still visits each vendor. He also leads a team of taste testers who, every morning, sample each of the 600 fruits and vegetables for sale that day.

"They cut them open, they taste them, sometimes they even check sugar levels, appearance, and they rate them on a scale of one to five," McInerny said.

It's a rating system that helps customers buy produce sight-unseen.

Nationwide, groceries are a $700 billion industry, but online sales make up less than 4 percent. Brad Stone, a senior writer for Bloomberg Businessweek, said the move online is the next frontier.

"I think over the next decade, the grocery delivery market really starts to mirror the e-commerce market," Stone said. "Where we just see, it starts small, but we see an increasing percentage of these transactions happening online. "

It's why retailers like Amazon and Walmart are breaking in.

Along the West Coast, green Amazon Fresh trucks have been making deliveries for seven years. They're now popping up along the East Coast, including Brooklyn and Philadelphia. Amazon charges customers an annual subscription fee of about $99 to deliver their groceries.

In Arkansas, Walmart is testing another model, Walmart Pickup, where customers can drive up to kiosks and get their groceries. And for a fee of $3 to $10, customers in California and Colorado can have a selection of items delivered to their door with Walmart To Go.

FreshDirect also charges a premium, around $6 to $8 per delivery. But for working parents Michael and Holli Rochios the added cost is worth it.

"We've done the calculations a couple of times, and it really is not that big of a difference, but it's a huge cost savings in terms of the time we spend or convenience," Michael said.

Ackerman said to keep that balance between cheaper food that people can access but also covering their heavy overhead, his company created a model to eliminate inefficiencies.

"If you go to a grocery store and the meat counter, all the meat's pre-cut, and everything's laid out because when you go there you want to have this sense that there's this bounty of food," he said. "We only make the food after the food's been sold, so it's fresher, and we reduced our waste."

While FreshDirect is one of the largest online grocers, it's only available in five states along the East Coast. Ackerman said the company would love to expand but not at the expense of quality.

That's why they're constantly monitoring online reviews, even the ones from their toughest critics.

"My wife says she buys from me because she loves the service, not because she's my wife, so I think she would be very honest with me about that," Ackerman said. "She's very satisfied, so I know we're doing something right."

FreshDirect amassed close to $600,000 in New York City parking tickets in the first year alone. They've since mastered the technicalities and continue to be one of the highest-rated online grocers.