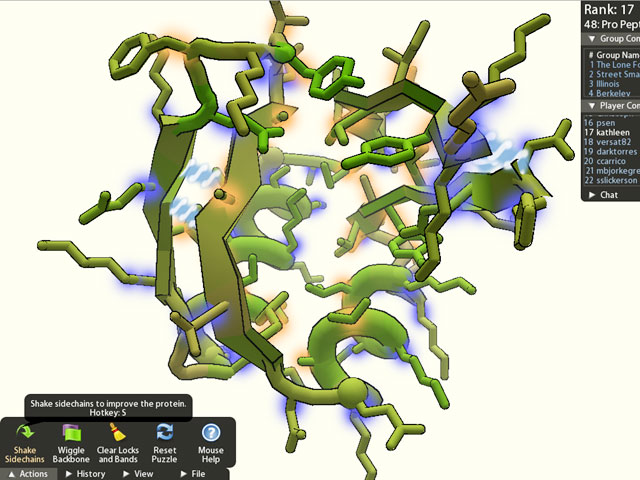 (CBS/AP) Online gaming is fun but not a productive use of time, right? Not so fast. Online gamers have deciphered the molecular structure of a key protein that retroviruses like HIV/AIDS need to multiply - an achievement that scientists believe will aid in the development of new AIDS drugs.

The non-scientist gamers came up with an accurate model of the so-called protease molecule in three weeks. Biochemists had been trying to create such a model for more than a decade.

"It's the power of citizen science," said Firas Khatib, a postdoctoral researcher in the lab of University of Washington biochemistry professor David Baker. Baker's lab developed the game, called Foldit, about three years ago, believing that they could tap into the brain power that puzzle-loving humans pour into computer games.

There are many examples of crowdsourcing in science, but most involve citizens helping out with drudgery, such as submitting data on animal sightings or running distributed computing programs on a home computer. Foldit players are providing answers beyond the capabilities of experts in the field.

Solving protein structures remains one of the most challenging problems in science. Proteins take shape from a strand of building blocks, called amino acids. Genes tell a cell's protein-making machinery the order for assembling the building blocks in a long, orderly strand. When a complex protein, such as an HIV protease, comes off the assembly line, it coils and folds to form an intricate molecular machine. Imagine, say, a sewing machine self-assembling from hundreds of parts arrayed on a string.

Because of the vast number of possible moves during protein folding, even advanced computers have trouble predicting the structure of large proteins. Foldit players use their intuition and 3-D problem-solving skills to figure out likely protein structures. Teams earn points by finding the most chemically stable shapes.

For the retrovirus problem, Foldit players started with scientists' rough-draft idea of the shape of the protease. During three weeks of play, gamers generated over a million structure predictions. The solution, reached by the winning team in 10 days, was nearly perfect. It gave Baker and colleagues all the information they needed to nail down the structure almost to the last atom.

Human minds have an advantage, Khatib says, because of their intuitive ability to see the potential for a delayed payoff from moves that seem like backward steps.

"Human players can see that you may have to go down this road, not doing well for a long time, but those steps are necessary if you want to get to a more correct solution," he says. "Even the best computers and computer algorithms aren't very good at that."

The scientists offered co-authorship to players who supplied the winning answers. All declined, asking only for recognition for their teams: Foldit Contenders Group and Foldit Void Crushers Group.

"It is a team thing. Everybody contributes," said a player from the Contenders Group, who asked to be identified by her Foldit user name, "mimi."

The study describing the structure was published in the journal Nature Structural & Molecular Biology on Sunday.