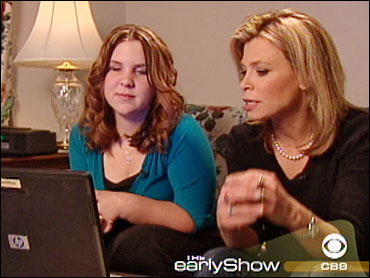 One of the primary goals of a teenager is to get attention, to socialize and to try on different identities. And despite the dangers, networking sites such as myspace.com have become popular places to go and meet new people.

But as The Early Show correspondent Tracy Smith reports in her second installment of a three part series, sometimes teens give out too much information.

In the vast social exchange that is myspace.com, kids can sometimes read a lot into a message from a stranger and experts say that in most sexual assault cases involving the Internet, predators are actually invited by their victims. The seduction takes place online, and teens are more vulnerable than they think.

Ashley Martin, 15, is like many kids her age, using the Web to socialize. She quickly got hooked on the networking Web site myspace.com, which brings the outside world in.

"It is so addictive," Ashley says. "It's nationwide. I mean it's everywhere."

Kids create their own personas on MySpace, by posting pictures and describing themselves in detail. For some, the idea is to post pictures that will attract the most comments.

Ashley says the best comments her postings got were "Oh, you're so hot."

For many teens, online conversations can quickly turn to sex.

"People will message you, 'Oh, you're beautiful,' or 'Hi, you're sexy. Can I get your number?' " Ashley explains. "And you're, like, 'Hey.' You know, it's just harmless. What does it matter if I say 'Oh, hey' back or give them my cell phone just to talk to 'em. Because it makes you feel better about yourself. You're like 'Hey, look, I'm wanted from another guy.' I'm attractive, they want to talk to me."

Like many girls, Ashley found herself getting hooked on the attention. She started posting sexier pictures to get more comments.

"She didn't let me see that too much," says Ashley's mom Margaret. "But as the pictures evolved I said, 'Ashley that's not an appropriate pose.' And I didn't know that those people weren't her friends, either. I had no idea they were from another state or another city."

"Parents are clueless. They're more clueless now than they ever were. And I'm sympathetic about that because the technologies are hitting us right and left," says Parry Aftab, executive director of WiredSafety.org.

Ashley's online and offline reality became muddled and she found herself infatuated with 21-year-old guy, Devin Bacciagalupo, whom she had never actually met.

"We told her to stop it, to get off of the computer, to quit doing this," says Ashley's father, Wallace Martin. "It's a waste of time. This is a fantasy thing. It is not healthy. It's not good. She would stay up a couple of nights with her homework, two or three nights. She could hardly stay awake at school the next day, because of … with this guy."

Ashley's personal details gave Devin clues of how he could get to her. "I was like, 'Hey he seems pretty nice, he knows what I am going through,' " Ashley recalls.

She admits Devin said all the right things and he was soon pressing Ashley for a meeting. One night, she said yes.

Devin met her in the trailer by the side of her house that Ashley had made into her own little hangout. And then she says it happened.

The next day, crushed and violated. Ashley found out that Devin had also seduced several of her friends online. Finally, Ashley went to her parents and the police.

"He is a monster," says Ashley's father. "He's a predatory monster, especially to go after children in this age group, who don't have the mental capability to make a distinction between reality and fantasy."

"Lots of the kids have fallen for someone they met online," says Aftab. "And then not only are they sexually molested, their heart is broken. And, frankly, I don't know which is worse."

Ashley was very brave about going public with her story. She did it to get the message out there to other kids. MySpace declined The Early Show's request for an interview but says they are doing everything they can to keep kids safe.

What can parents do to help their kids stay out of trouble?

Experts say, first, get the computer out of the bedroom. Next, tell them you want to look at their site and give them a day to clean it up. And realize that puppy love can be even more intense online.