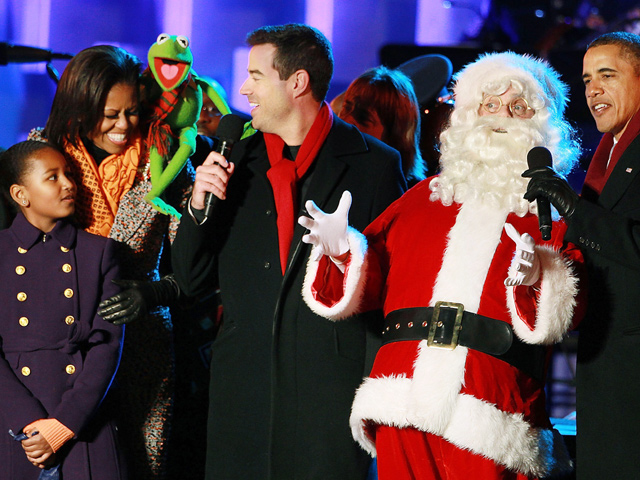 (CBS/AP) OneRepublic and singer Ellie Goulding were just some of the musicians who helped President Barack Obama and his family mark the start of the Christmas season at the tree lighting ceremony Thursday night in Washington.

Mr. Obama was joined at the ceremony by his wife, Michelle, daughters Sasha and Malia and mother-in-law Marian Robinson. The first lady read Clement Clarke Moore's poem "A Visit from St. Nicholas" with Muppet star Kermit the Frog.

In remarks delivered during the tree-lighting ceremony, President Obama urged the crowd to be generous and to help others in need during the holidays.

The National Christmas Tree, a 26-foot Colorado blue spruce, was planted in March on the Ellipse, a park that lies between the White House and the National Mall. Strong winds in February toppled the previous tree, which stood in the park since 1978.

The ceremony marks the 89th holiday tree lighting. The tradition began with President Calvin Coolidge in 1923.