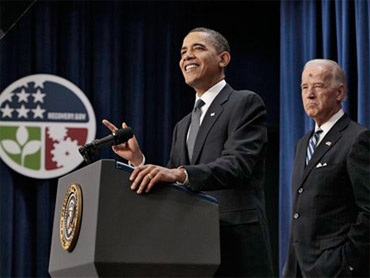 (AP Photo/Pablo Martinez Monsivais)
For the White House, it's an anniversary observance with a vengeance.

A year to the day after the $787-billion American Recovery and Reinvestment Act was signed into law, President Obama and Vice President Biden were emphatic about declaring it a happy anniversary.

"We acted because failure to do so would have led to catastrophe," said Mr. Obama to a White House audience of Recovery Act supporters.

"Without any question the Recovery Act is working. It's working well," said Biden in introducing the president.

With speeches, appearances, events, interviews and op-ed columns, top Administration officials launched a media blitz to make the case that the hundreds of billions of dollars in Recovery Act spending so far has been worthwhile.

The White House campaign is also designed as a blunt force pushback against Republican leaders and other critics of the Recovery Act who portray it as part of an Administration spending binge that hasn't delivered on its promises while pushing the government deeper into debt.

With speeches, charts, graphs and a 27-page report, the White House is laying out its case that the Recovery Act spending projects have helped turned the economy around.

"They have clearly halted an economic freefall," proclaimed a 5-page press release from the Vice President's office. Mr. Obama went further still in his remarks, asserting "it is largely thanks to the Recovery Act that a second Depression is no longer a possibility."

The Administration seeks to drive home its points that the Recovery Act has:

•supported as many as 2.4-million jobs

•provided tax relief of $120-billion to families and small businesses.

"Despite all this, the bill still generates some controversy," Mr. Obama acknowledged in his anniversary speech this morning.

He portrayed Republicans as hypocritical for attacking the Recovery Act, "even as many of them show up at ribbon-cutting ceremonies for projects in their districts."

The president conceded that millions of unemployed have not gotten jobs from the Recovery Act. "The truth is, the Recovery Act was never intended to save every job or restore our economy to full strength. No bill or government program can do that."

His words are part of an effort to pre-empt criticism of the program on its first anniversary.

"Somewhere there's going to be some story of some money that ended up being misspent," said Mr. Obama. But he was quick to add that "when you think about the scope, the magnitude of this thing, this program has run cleanly, smoothly, transparently."

Even before the President's remarks, top Republican leaders were out with their criticism.

As if responding to Boehner, Mr. Obama said it can be argued rightly that "we haven't made as much progress as we need to make when it comes to spurring job creation."

But he asserts the Recovery Act is on track to save or create another 1.5-million jobs this year. He reminded that he also expects Congress to take new action on another jobs bill – providing tax incentives to small businesses that hire additional workers.

"Our work is far from over," said the president, but "we have rescued this economy from the worst of this crisis." He vows to "leave our children an economy that is stronger and more prosperous that it was before."

Left unspoken by him was any reference to the additional National Debt on which those children will have to pay interest because of the Recovery Act and similar programs.