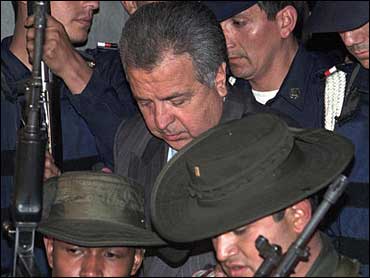 The former head of the cartel that dominated the world's cocaine trade walked free from prison after serving only half his sentence, despite frantic efforts by U.S. and Colombian authorities to find new charges against him to block his release.

Gilberto Rodriguez Orejuela left a maximum security prison late Thursday, after a Colombian judge upheld a court order that Rodriguez be released early because he took part in a work-study program in prison.

"I'm fine, fine," the gray-haired former Cali cartel chief told reporters outside the prison in Tunja, a town 60 miles northeast of Bogota. He was accompanied by an unidentified man with a garbage bag that presumably carried his belongings.

Rodriguez, along with his still-imprisoned brother Miguel, controlled about 80 percent of the world cocaine market after drug lord Pablo Escobar was killed in 1993. Their Cali-based empire moved multi-ton shipments of cocaine to the United States and across the globe.

They enlisted the help of U.S. drug officials, together scrambling to find new charges that would allow the former drug lord to be held in prison or extradited to the United States.

"Some documents have arrived from the United States that officials are evaluating, and that could stop the release," Uribe's spokesman, Ricardo Galan, told The Associated Press Thursday before Rodriguez's release.

But their efforts failed.

Arrested in 1995 and sentenced to prison until 2010, Rodriguez was ordered released last week by Judge Pedro Suarez. Colombian officials suggested Suarez had been bribed by the multimillionaire brothers - a charge they denied - and halted Rodriguez' release. But a different judge upheld Suarez' decision on Thursday and ordered an investigation into the executive branch for trying to interfere in judicial decisions.

Justice Minister Fernando Londono acknowledged that Colombia was embarrassed by having to let Rodriguez go, but said his government would respect the decision.

"This is a moment of mourning and pain for the country's image and for the administration of justice in Colombia," Londono said.

U.S. officials in Bogota criticized the rulings that freed Rodriguez

"We really lament the decision," U.S. Embassy economic counselor Francisco Fernandez said in Bogota Thursday. "But we understand that ... the government did everything possible to try and avoid this."

Details on the information provided by U.S. officials were not released, but drug agents have been trying to link Rodriguez and his brother Miguel to international crimes committed after 1997, when Colombia's constitution was revised to allow the extradition of its citizens.

Miguel Rodriguez must remain in prison to serve an additional four-year sentence for a bribery charge, which reportedly stemmed from a 1996 attempt to buy his way out of prison.

While Escobar's Medellin cartel was ultraviolent, killing scores of police, judges, journalists and government officials in an attempt to force Colombia to bar extraditions, the Cali cartel ran the drug business more like a corporation - although one that did not hesitate to kill.

One of its victims was a crusading anti-drug journalist, Manuel de Dios Unanue, who was slain in New York in 1992.

The Cali cartel also tried to buy influence, contributing millions of dollars to the 1994 presidential election campaign of Ernesto Samper. The scandal soured relations with Washington after Samper won the presidency, and Washington revoked his U.S. visa.

Authorities believe that all the top leaders of the Cali cartel have been jailed or killed, yet remnants of the drug operation still exist in Cali, Colombia's third-largest city, 185 miles southwest of Bogota.

U.S. authorities believe William Rodriguez, the son of Miguel Rodriguez, may be one of the new drug leaders in Cali. In August, the United States requested the extradition of the 37-year-old lawyer, who is currently a fugitive.
By Juan Pablo Toro