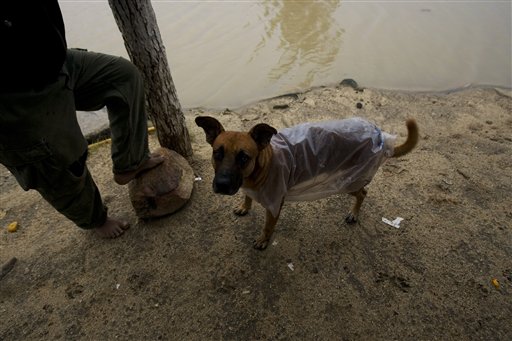 That's just a taste of what Jimmy Sands, Timmy O' Brian, Thomas McGoorty and Brandon Johnson will get to enjoy once they arrive to Universal Studios in Orlando, Fla.

The Major of Whoville and the Grinch met the four volunteer firefighters when they finally stepped out of the crammed taxicab that was their home for three days.

For 72 hours, the volunteer firefighters endured no heat, cell phones and showers! They were also allowed only 10-minute breaks during the even hours.

"I don't think I'll be in a cab for the rest of my life," said Timmy. The others emphatically agreed.

The hardest thing for the team to bear? "Just getting comfortable," Jimmy said. He was stuck with Timmy and Brandon in the back of the cab while Tom, for no particular reason, got the front seat.

After all this bonding, the winners were somewhat reluctant to agree on whether or not they will travel together to Orlando. And yet they all said, if asked, they would do it again.

And why not? They had moral support from their family and friends: "A lot of people came by," said Jimmy.

And they enjoyed a lot of food. On Thursday morning, breakfast came courtesy of New York's oldest hotel, The Algonquin. Wednesday, chef John Halligan from Regent Wilshire Hotel treated them to a New York-style breakfast. On Tuesday, Alan Rosen gave each a slice of Junior's Cheesecake. And best of all, Tuesday night, they were surprised with a home-cooked meal.

The firefighters also received The Daily News newspaper to keep in touch with the outside world.

Competition started Tuesday, Nov. 5. "Survivor: Marquesas" winner Vecepia "Vee" Towery offered the rookies some tips to outwit, out smart and outlast each other in a New York yellow cab:

She also helped The Early Show's Julie Chen go through the bag each contestant packed to make sure they were regulation ready.

Their duffel bags include their luxury items (food and cell phones are not allowed) to survive. But to make things easier them, A. W. Hotel concierge presented a "W" Feel-good package with pillows, towels, toothbrush, and more.

Here is what the Taxicab challengers won:

After the events of Sept. 11, the outpouring of support in New York City also took the form of dozens of young people, mostly men, expressing their desire to help their communities by signing up with their local fire brigade.

The West Hamilton Beach Fire Department in Howard Beach, Queens, for example, has accepted 15 new members since Sept. 11, 2001 - normally the department is lucky to get three or four new members a year. Recently, the West Hamilton Dept. sent more than a dozen of these new "probys" (probationary firefighters) to the Nassau County Fire Service Academy for basic training - the largest "proby" class in decades.

New York City has only 10 volunteer fire departments; they are located in Staten Island, Queens, Brooklyn, and the Bronx. A city charter in 1904 established the volunteer departments and they have been putting out fires ever since.

The rest of the city is protected by the paid firefighters of the Fire Department of New York (FDNY).