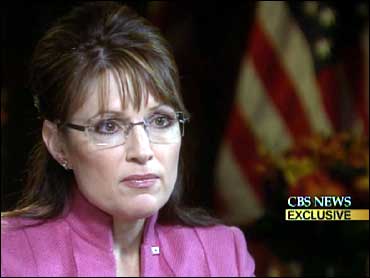 When CBS News anchor Katie Couric sat down for an exclusive interview with vice presidential nominee Sarah Palin, she focused on the economy - but also addressed reports that the lobbying firm of Sen. John McCain's campaign manager received payments from the controversial mortgage giant Freddie Mac until last month. Couric asked for the Alaska governor's reaction to that. Watch Day II of the interview, on foreign policy, here.

Sarah Palin: My understanding is that Rick Davis recused himself from the dealings of the firm. I don't know how long ago, a year or two ago that he's not benefiting from that. And you know, I was - I would hope that's not the case.

Katie Couric: But he still has a stake in the company so isn't that a conflict of interest?

Palin: Again, my understanding is that he recused himself from the dealings with Freddie and Fannie, any lobbying efforts on his part there. And I would hope that's the case because, as John McCain has been saying, and as I've on a much more local level been also rallying against is the undue influence of lobbyists in public policy decisions being made.

Next, Couric asked about the $700 billion government bailout of bad debt - and whether she supports it.

Palin: I'm all about the position that America is in and that we have to look at a $700 billion bailout. And as Sen. McCain has said unless this nearly trillion dollar bailout is what it may end up to be, unless there are amendments in Paulson's proposal, really I don't believe that Americans are going to support this and we will not support this. The interesting thing in the last couple of days that I have seen is that Americans are waiting to see what John McCain will do on this proposal. They're not waiting to see what Barack Obama is going to do. Is he going to do this and see what way the political wind's blowing? They're waiting to see if John McCain will be able to see these amendments implemented in Paulson's proposal.

Couric: Why do you say that? Why are they waiting for John McCain and not Barack Obama?

Palin: He's got the track record of the leadership qualities and the pragmatism that's needed at a crisis time like this.

Couric: But polls have shown that Sen. Obama has actually gotten a boost as a result of this latest crisis, with more people feeling that he can handle the situation better than John McCain.

Palin: I'm not looking at poll numbers. What I think Americans at the end of the day are going to be able to go back and look at track records and see who's more apt to be talking about solutions and wishing for and hoping for solutions for some opportunity to change, and who's actually done it?

Couric: If this doesn't pass, do you think there's a risk of another Great Depression?

Palin: Unfortunately, that is the road that America may find itself on. Not necessarily this, as it's been proposed, has to pass or we're going to find ourselves in another Great Depression. But, there has got to be action - bipartisan effort - Congress not pointing fingers at one another but finding the solution to this, taking action, and being serious about the reforms on Wall Street that are needed.

Couric: Would you support a moratorium on foreclosures to help average Americans keep their homes?

Palin: That's something that John McCain and I have both been discussing - whether that ... is part of the solution or not. You know, it's going to be a multi-faceted solution that has to be found here.

Couric: So you haven't decided whether you'll support it or not?

Palin: I have not.

Couric: What are the pros and cons of it do you think?

Palin: Oh, well, some decisions that have been made poorly should not be rewarded, of course.

Couric: By consumers, you're saying?

Palin: Consumers - and those who were predator lenders also. That's, you know, that has to be considered also. But again, it's got to be a comprehensive, long-term solution found ... for this problem that America is facing today. As I say, we are getting into crisis mode here.

Couric: You've said, quote, "John McCain will reform the way Wall Street does business." Other than supporting stricter regulations of Fannie Mae and Freddie Mac two years ago, can you give us any more example of his leading the charge for more oversight?

Palin: I think that the example that you just cited, with his warnings two years ago about Fannie and Freddie - that, that's paramount. That's more than a heck of a lot of other senators and representatives did for us.

Couric: But he's been in Congress for 26 years. He's been chairman of the powerful Commerce Committee. And he has almost always sided with less regulation, not more.

Palin: He's also known as the maverick though, taking shots from his own party, and certainly taking shots from the other party. Trying to get people to understand what he's been talking about - the need to reform government.

Palin: I can give you examples of things that John McCain has done, that has shown his foresight, his pragmatism, and his leadership abilities. And that is what America needs today.

Couric: I'm just going to ask you one more time - not to belabor the point. Specific examples in his 26 years of pushing for more regulation.

Palin: I'll try to find you some and I'll bring them to you.