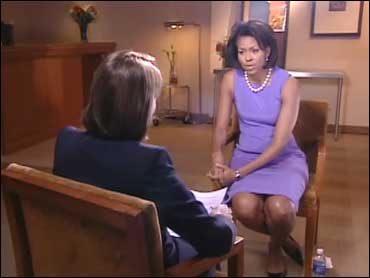 The 44-year-old graduate of Princeton and Harvard Law School was born and raised on the south side of Chicago, where her late father worked as a water pump operator for the city. And her mother stayed home to raise her, as well as her older brother, Craig, who coaches basketball at Brown.

Michelle now travels two-to-four days a week, and is in leave from her job as a vice president of the University of Chicago Medical Center.

When she's on the road, her mother cares for her two daughters, 9-year-old Malia and 6-year-old Sasha.

Her husband says she's such an effective advocate that he calls her "the closer."

What follows is a transcript of part of Katie Couric's interview with Michelle Obama. Part II, which will focus on more personal side of Michelle Obama, will air Friday on the CBS Evening News with Katie Couric.


Couric: You've seen the crowds, the way they embrace your husband. Some commentators have used the word "messianic." Do you ever worry that the whole thing, the whole movement is a little over the top for some voters?

Obama: Barack and I talk about this all the time. We talked about it before the decision to run, because … when you're really trying to make serious change, you don't want people to get caught up in emotion because change isn't emotion. Because change isn't emotion. Its real work and organization and strategy - that's just the truth of it. I mean, you pull people in with inspiration, but then you have to roll up your sleeves and you've got to make sacrifices and you have got to have structure.

Couric: Your husband's experience has been repeatedly questioned. Some voters worry that with three years in the Senate he needs a little more experience under his belt before he's ready. What do you tell people who are worried about that?

Obama: I tell people that in our politics we measure by this very narrow definition. And a lot of times its years in Washington, or whether you've made a lot of money running a very large corporation. I mean, we just tend to weigh certain experiences more than others. But what I say is that the measure of leadership is the choices that people made over a lifetime, not when everybody's looking.

Obama: Community organizing. Now, when was the last time we've had a president of the United States who spent years working on the streets in a major city, for years working with people who never had a voice and advocating for better streets, cleaner streets, safer communities? Somebody who has worked as a constitutional law scholar, [as a] civil rights attorney, for years. Barack has more legislative experience than Hillary Clinton does. Barack has spent eight years, in addition to his work as a U.S. senator, in the state legislature. Barack is highly experienced. It's not conventional experience that we're used to seeing, because most people have spent a whole lot of time in Washington.

Portions of Couric's interview also aired on Friday's Early Show. They involved the causes Michelle Obama would fight for as first lady and what she would say to those who feel her husband is so much younger than Hillary Clinton. See a transcript here.
Couric: If it ends up being a race against your husband and John McCain ... Sen. McCain will undoubtedly focus on ... your husband's lack of foreign-policy experience. How do you combat that?

Obama: One of the things Barack will say is that … we're right now in a war that should have never been authorized and never been waged. People like John McCain and people with a whole lot of years in Washington, who looked at a situation and read it wrong.

Couric: But what about September 11? Nobody wanted that to happen. And I think the country wants to be reassured that the person in the Oval Office will know how to respond.

Obama: You know, one of the things we can't do in this country is operate from a place of fear. How are we going to reestablish our footing in the world and change conversations globally so that we … move to a different place in how we deal with issues of terrorism?

That we're … instead of protecting ourselves against terrorists, that we're building diplomatic relationships and we're investing in education abroad so that we're making sure that kids are learning how to read as opposed to ... fight us.

Couric: This must be an extremely heady experience for both of you. And I know you have said he's always had a healthy ego. How do you keep it all in check?

Obama: You know, he's got a healthy ego because anybody who decides they're gonna be president of the United States has to think well of themselves.

But the truth is there is are a lot of bumps and bruises along this, you know, campaign trail. There are a lot of humbling experiences. I mean, as I said, Barack has spent most of this year being the person who has no chance of winning.

Obama: Oh yeah. Yeah. It's probably once a week now. Yeah, absolutely. This is a trip.