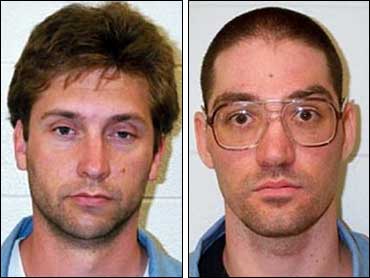 One of two convicts who escaped this week from the Iowa State Penitentiary was captured Thursday in Illinois, authorities said.

Martin Moon, 34, was caught in Chester, Ill., near the Menard State Penitentiary in southern Illinois, Iowa Gov. Tom Vilsack said. Prison officials noticed a car parked near the prison and notified local police, who captured Moon after a brief chase.

A search for the other escapee, 27-year-old Robert Joseph Legendre, is now nationwide, investigators said. He and Moon broke out of the prison in Fort Madison on Monday night.

Authorities said they used a homemade grappling hook to scale an unguarded section of the prison's limestone walls and somehow got around a wire that is supposed to activate an alarm when touched.

Police in Randolph County, Ill., said Moon was found sleeping in a car near Chester, about 50 miles southeast of St. Louis. When an officer stopped to run on a check on the car's license plates, Moon drove off. After a short chase, Moon jumped out of the car and ran into the woods, where he was caught, police said.

Moon crashed the car into a tree, Vilsack said.

An investigation of the escape has begun, Vilsack said.

"When the job is not done, people are going to be held accountable and responsible," Vilsack said. "There were a series of mistakes that were made."

Moon must appear in court in Illinois and faces extradition to Iowa.

State Sen. Gene Fraise, D-Fort Madison, said he was told by prison officials that the inmates scaled a prison wall near an unmanned guard tower.

"The only thing I know for sure is they went over the wall in the southwest corner with a rope and a grappling hook they fashioned out of metal from somewhere," Fraise said.

He said the inmates got past a taut-wire designed to activate an alarm when touched, and got over razor wire at the top of the wall.

Fred Scaletta, a corrections department spokesman, said the inmates used upholstery webbing, a material used in the furniture production at a Prison Industries facility inside the prison, to scale the wall.

The guard tower in that section had been unmanned since 3 p.m. — a policy that Fraise said was implemented due to state budget cuts.

"I don't want to say I told you so, but those towers were put there for security, and when you don't man those towers, that puts a hole in your security," Fraise said.

"Budget cuts are part of it," Scaletta told The Associated Press. "There is more to it than that."

Rep. Lance Horbach, R-Tama, criticized Fraise for suggesting budget cuts were a factor in the escape.

"The assertion that staffing levels were inadequate is false and misleading," he said. "In reality, we should explore why the taut wire system failed to alert guards and security staff that these two convicts were attempting to escape.

"We should first focus on finding the at-large criminals, and stop pointing fingers in a blatant attempt to capitalize on a very frightening situation," Horbach said.

Prison spokesman Ron Welder said the prison was locked down following the escape.

The inmates were working inside penitentiary walls for Prison Industries when the escape occurred, Welder said.

The Iowa State Penitentiary, just a block from U.S. Highway 61 and close to a bridge that crosses the Mississippi River to Illinois, opened in 1839 and is the oldest prison in the United States west of the Mississippi River. Its maximum security section has a capacity of 550 inmates, and including minimum security and other sections the prison has an overall capacity of 1,166, Welder said.

The escape from the maximum security unit is the first successful breakout since five inmates fled by hiding in a garbage truck in March 1979, Welder said. Those inmates were later captured at the county landfill.

Editor's note: The Associated Press has clarified that one of the escapees, Robert Joseph Legendre was not convicted of murder, as was previously reported. He was convicted of first-degree kidnapping, attempted murder and a charge called use of deadly weapons enhanced.