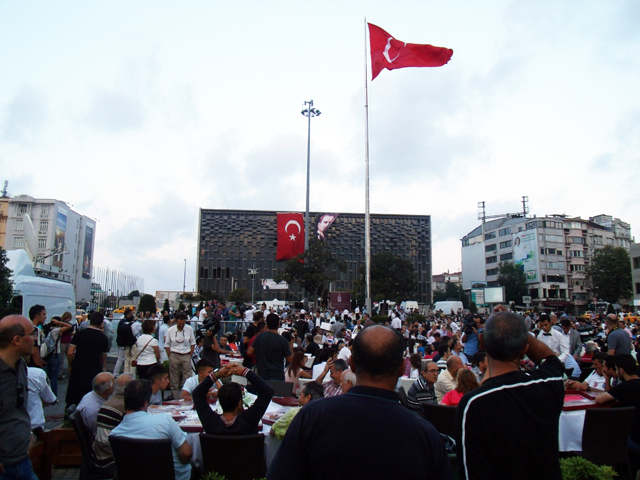 "Stay close and if people start running, follow me to the right past the McDonalds. There is a cafe we'll be safe in if the police start attacking," our friend Mehmet Akin said.

I arrived in Istanbul late this past Sunday night. I was visiting with a Turkish friend on holiday, and Monday was our first night out in the city. I kept up with the events before my visit, but had read that the protests were scattered and had mostly died down. I had no real sense of simmering tensions that evening as we walked down Istiklal Avenue, the main artery of shopping and dining for Turks and tourists in the Taksim neighborhood, visited by hundreds-of-thousands of people each day.

It had just gotten dark around 10 p.m., and people on the avenue wandered around, milling in an out of clothing shops, while others sat smoking hookahs and drinking traditional Turkish Chai at sidewalk cafes embedded in the alleyways of Istiklal.

And then, out of nowhere, like a flash mob forming for a street performance, a group of protestors appeared and started chanting and clapping. "Everywhere is Taksim, everywhere is resisting," they shouted in Turkish. I asked Mehmet what was happening and flipped on my iPhone to take some video. Mehmet was on the phone with a friend who told him that a group of protestors had just been hit with tear gas a bit further down the avenue, and the police might be coming this way.

I got a bit nervous, but with families plodding around with their kids, and vendors all over the streets selling watermelon, and roasted corn on he cob, it hardly seemed like something was imminent, or that police would do anything on this busy thoroughfare.

The protestors grew louder, and as the crowd swelled, there was a sudden boom that sounded like a cannon. People ran in every direction.

And then there was a louder boom. People shouted. Mehmet yelled out to my friend Zeynep and me, "Cover the backs of your head," as we sprinted toward the alleyway by the McDonald's. My throat was burning, and my eyes stinging and watering from the tear gas canisters that had just been fired in our direction.

"Use your hand to cover the back of your head," Mehmet shouted again. "They're firing rubber bullets," he said, out of breath.

Holding up my hand hardly seemed like a good way to protect myself from a speeding tear gas canister, or a flurry of rubber bullets. I saw families, little kids, and people who looked like tourists ducking for cover in restaurants and shops. One woman hid behind a vending cart selling grilled chestnuts.

A bunch of the flash mob protesters ran in the same direction, hooking right past the McDonald's, slipping into a doorway held open by a young man with a scarf covering his face to protect from the tear gas. Mehmet paused at the stairs, and we both realized Zeynep was no longer behind us.

"Where's Zeynep?" I shouted to him. We looked around but didn't see her. Because I didn't have a gas mask, Mehmet told me to go upstairs and wait in the cafe until things calmed. He waited outside to find her and check if others were okay. Police sirens howled and there were more booms. At the top of the stairs, a man and woman said something to me in Turkish and I stared at them blankly.

"You can come inside, it's safe in here" the man said after quickly realizing I was not a local, probably from the terrified look on my face.

Inside the Kumbara cafe, most people gathered by the balcony windows to witness the goings-on, but some sat sipping chai, ordering from a waitress as if the chaos around them was all imagined.

And then the tear gas seeped in, and people grimaced and rubbed their eyes calling for the windows to be shut. Much to my relief, Mehmet and Zeynep appeared a couple minutes after.

Mehmet introduced us to some people at Kumbara. Many of them were involved in the Taksim Solidarity Movement -- a cross-section of groups protesting against the government actions in Taksim Square. The owner, Ahmet Saymadi is a leading activist of the movement, and a number of inconspicuous cafes similar to his serve as safe havens for protestors escaping from police. Somebody handed me a small blue surgeon's mask and we surveyed the scene outside before hopping a taxi home to avoid any chance encounters with tear gas launchers or water cannons.

Later that night, we found out that roughly 50 people were injured, some of them seriously, including a teenage boy who suffered a brain hemorrhage when he was hit in the head by a tear gas canister. In media reports, government officials claimed that the protestors provoked the violence.

On Tuesday, the first night of Ramadan, rumors of another confrontation swirled as people planned a break-the-fast sit-in on Istiklal avenue -- a thumb in the eye of the government which organized a free Iftar dinner on Taksim Square (Iftar is the name of the traditional evening meal to break the Ramadan fast). The protesters' Iftar feast turned out many more diners than the free meal offered by the municipality. Thousands of people sat on colorful sheets called sofras in the middle of Istiklal eating pita and doughy cheese pastries called Boreks. A large group of police with shields, batons, and tear gas launchers stood awkwardly in between the two groups, their water cannons trained on the protest diners.

After Iftar, I went back to Kumbara and met Ahmet Saymadi there. I asked him about the protesters' goals now that the court had ruled in their favor and Gezi park was essentially open.

"We don't trust this government at all. They don't respect this decision. There is little doubt that they will find a way to overpower the ruling, and so it's important that we show the resistance remains strong," Saymadi said.

"Why did they prevent us from going to the park to protest yesterday if it is truly open?"

When asked about the protesters' immediate demands, Saymadi said they want for the park to be emptied of police, and for the government to finish the current construction in Taksim and stop preventing people from enjoying their most significant public space.

As for claims that the protesters won't stop until President Recep Tayyip Erdogan and the current government resigns, Saymadi said this is not the central goal of the movement. He added that not all of Taksim Solidarity members want that.

"Yes, many would like to see the current government resign because of the violent way they suppressed protests, but then who knows what comes after that," Saymadi cautioned.

"The mentality of Turkish government is what must change. This government has become so much more powerful then previous governments. They have intimated our media and invaded our personal lives for too long."

Jonathan Schienberg is an Associate Producer for "60 Minutes"