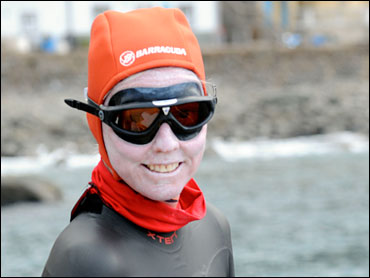 Jennifer Figge pressed her toes into the Caribbean sand, exhilarated and exhausted as she touched land this week for the first time in almost a month.

Reaching a beach in Trinidad, she became the first woman on record to swim across the Atlantic Ocean - a dream she'd had since the early 1960s, when a stormy trans-Atlantic flight got her thinking she could don a life vest and swim the rest of the way if needed.

The 56-year-old left the Cape Verde Islands off Africa's western coast on Jan. 12, battling waves of up to 30 feet and strong winds.

David Higdon, a friend of Figge who kept in touch with her via satellite phone, said she had originally planned to swim the Bahamas, but inclement weather forced her to veer 1,000 miles off course to Trinidad, where she arrived on Feb. 5.

Figge plans to continue her odyssey, swimming from Trinidad to the British Virgin Islands, where she expects to arrive in late February. The crew won't compute the total distance Figge swam until after she completes the journey, Higdon said.

Then it's home to Aspen, Colorado - where she trained for months in an outdoor pool amid snowy blizzards - to reunite with her Alaskan Malamute.

"My dog doesn't know where I am," she told The Associated Press on Saturday by phone. "It's time for me to get back home to Hank."

The dog swirled in her thoughts, as did family and friends, as Figge stroked through the chilly Atlantic waters escorted by a sailboat. She saw a pod of pilot whales, several turtles, dozens of dolphins, plenty of Portuguese man-of-war - but no sharks.

"I was never scared," Figge said. "Looking back, I wouldn't have it any other way. I can always swim in a pool."

Her journey comes a decade after French swimmer Benoit Lecomte made the first known solo trans-Atlantic swim, covering nearly 4,000 miles from Massachusetts to France in 73 days. No woman on record has made the crossing.

Figge woke most days around 7 a.m., eating pasta and baked potatoes while she and the crew assessed the weather. Her longest stint in the water was about eight hours, and her shortest was 21 minutes. Crew members would throw bottles of energy drinks as she swam; if the seas were too rough, divers would deliver them in person. At night she ate meat, fish and peanut butter, replenishing the estimated 8,000 calories she burned a day.

Figge wore a red cap and wet suit, with her only good-luck charm underneath: an old, red shirt to guard against chafing, signed by friends, relatives and her father, who recently died.

The other cherished possession she kept onboard was a picture of Gertrude Ederle, an American who became the first woman to swim across the English Channel.

"We have a few things in common," Figge said. "She wore a red hat and she was of German descent. We both talk to the sea, and neither one of us wanted to get out."

Figge arrived on Trinidad's Chacachacare Island, an abandoned leper colony, at 5:20 p.m. She plans to leave Trinidad on Monday night. During this brief respite, she has avoided the hotel pool and nearby ocean, opting instead for the treadmill.