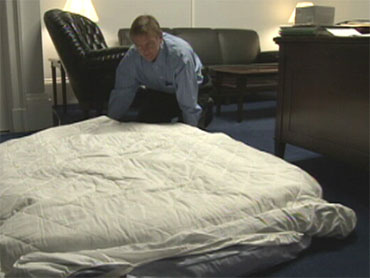 "It's convenient. I don't face the traffic," Walberg told us when we visited him this week on the fourth floor of the Cannon office building.

"I can jokingly tell my constituents I am in my office 24 hours a day for you," he said.

Walberg, a returning Republican freshman who slept in his office during his previous term in Congress, is among the most prepared for the bunking ritual. He has a sturdy air mattress, a double espresso maker, and a shelf of Kellogg's cereal boxes in his closet. (Kellogg's is headquartered in his district).

"I probably got it as good as a man cave can be," Walberg said.

Down the hall, freshman Republican Joe Walsh of Illinois, is still figuring out how to manage his nights. He sleeps on a couch.

"I think it's important that we show we don't live here, we are not creatures of this town," Walsh told us. "There's so much to do the next two years, I don't want to be distracted with another place. I don't want to have to think about an apartment."

Walsh, Walberg and nearly two dozen of their colleagues are part of a trend that may have reached a historic high point.

A CBS News survey of all freshmen members of the U.S House of Representatives has found that at least 21 of the 96 members are sleeping in their office - that's 19 of the 87 new Republicans and 2 of the 9 new Democrats.

The reasons range from making a symbolic statement that they are not part of Washington, proving they are fiscal conservatives, and just saving money.

They sleep on air mattresses, cots, couches, and rollaway beds.

Arizona Representative Paul Gosar, a dentist from Flagstaff, is among the new Capitol campers. He estimates that he will save $20,000 a year by not paying for rent or parking. That's no small change when there is no taxpayer stipend for congressional housing, and when (like Gosar) you have three teens in high school eyeing college.

"So this becomes very economical from my stand point, as well as very efficient," Gosar told us. "This has to match a budget with my time, making sure I'm giving my constituents my full breadth and my full involvement, and this is the way I found it works for me."

At night, Gosar, a self-described workaholic, reads, catches up on the news, and uses the House gym, open exclusively to current and former representatives.

"It allows me to continue my work patterns, stay on the job and focused, and I get stuff done," he said.

Besides, Gosar likes to cook. To enable his hobby, and because the Hill cafeterias close in the afternoon, Gosar has reorganized a large, cinder block supply cage across the hall from his office into a closet and kitchen. Across from a hanging row of dry cleaning, he has a crock pot, an electric griddle, a microwave, toaster, refrigerator, and file cabinet drawer full of dishes, silverware, and glasses.

Pointing to the crock pot, he says, "You can put some frozen chicken in with some bouillon, some vegetables, let it simmer all day, and you're ready to rock 'n roll."

For breakfast, he tends toward frozen waffles. He eats standing up, and washes the dishes in his office bathroom.

"This is the glamorous life," he quipped.

The House freshmen sleeping in their office range from ages 37 to 59.

Wisconsin's Sean Duffy, previously a champion lumberjack, cites the cost of a second home. "The less comfortable he is out in D.C., the more likely he is to get home as often as he can," said spokesman Daniel Son.

Ohio's Steve Chabot, like Walberg, bunked on the Hill before. Nevada's Joe Heck, like Gosar, is a doctor.

A few members we did not include in our total, such as Pennsylvania Republican Tom Marino, say they are sleeping in the office only temporarily, with permanent arrangements up in the air.

A few others, like Colorado's Cory Gardner, said they seriously considered roughing it. "He wanted to, but his wife wouldn't let him," said spokeswoman Rachel Boxer.

Enabling the trend is the more compressed schedule inaugurated by the leadership of the 112th Congress - essentially a four-day work week with most business squeezed between Tuesday and Thursday, plus more weeks in recess.

"I don't want to live in this town. I want to be home all the time," Rep. Walsh said.

We don't know if the number of office sleepers is setting a record this year, because no one keeps an official count. Anecdotally, House historians point to the habit starting in the 1980s. In the 1990s, House Majority Leader Dick Armey of Texas was known to sleep in his office.

Now, House Majority Whip Kevin McCarthy of California is a trend setter. (His office declined to comment). Fifth-term Oklahoma Republican John Sullivan advertised his frugal sleeping habit in a 2008 campaign advertisement, claiming, "I watch your pennies, and I'll watch mine."

"There is nothing in the House rules that prohibits Members from sleeping in their offices," says Bill Weidemeyer, the Superintendent of House office buildings.

He says the only challenge is trying to keep construction noise low, as such work typically occurs after hours even when Congress is not in recess. There have been the occasional noise complaints from House sleepers, for example, when the year-long roof rebuild of the Rayburn House Office Building was ongoing.

The sleepers do add a little burden to the housekeeping staff, Weidemeyer says, but no Washington D.C. laws or health code governs the practice. Like the Vatican, Congress rules its own real estate.

Bass, who was formerly speaker of the California state assembly, said she is not surprised none of the House's 13 new female members say they are going to crash on the floor.

While literally living in your office away from family could increase the loneliness of life in Congress, members told us they find great camaraderie at dawn in the House gym - a discreetly-marked facility in the sub-basement of the Rayburn House Office Building.

Rep. Walberg said the morning workouts that come with sleeping on the Hill made serving in Congress the healthiest job of his career.

Rep. Bass said during the office lottery, many Members were most concerned picking an office in closer proximity to the gym.

"I think it's a little bit of the machismo side of things," Bass said. "I'm going to show that I'm, you know, a guy, I'm tough, I'm working.' You know what? I go home at night, I continue to work. I don't have to prove a point."

Rep. Allen West, a freshman Republican from Florida, rents an apartment. "He thinks it's sad that congressmen are sleeping in the office. He thinks you need a break, even it it's just a few hours to get out of this building," said spokeswoman Angela Sachitano.

Republicans dominate the trend but are joined by some Democrats sleeping in their office, including freshmen John Carney of Delaware and Hansen Clarke of Michigan.

Rep. Mike Quigley, an Illinois Democrat, sleeping in his office for a second term, put his choice in perspective by pointing out that 10 percent of his constituents are jobless, 20 percent lack health insurance, and 40 percent of homeowners in his district owe more on their mortgages than their houses are worth.

"So, for those to suggest this is an inconvenience or a hardship - I have a great job, it's an honor to have this job, and what's more, I have a wonderful home in Chicago," Quigley told us.

Besides, Quigley added, his commute is short, he doesn't have the hassle of handling a second residence, and it makes no difference when you are getting some shut eye.

THE LIST
Freshmen Members of the U.S. House of Representatives sleeping in their Washington, D.C., offices: