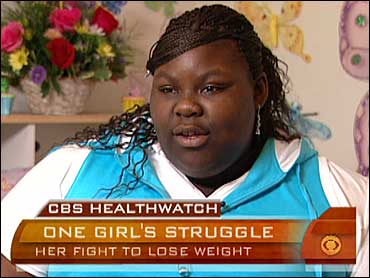 
According to the Centers for Disease Control and Prevention, 16 percent of children in the United States are obese. This summer, CBS News correspondent Priya David followed one young lady from Raleigh, N.C., as she embarked on a life-changing journey.

Tiffany King is a popular 12-year-old, but behind her light hearted demeanor is an empty ache.

Tiffany's father died five years ago in an automobile accident. She says talking about the loss was too hard, so she found comfort another way.

"By eating, you know, you think that you don't have anyone to talk to, so basically I turned to food," Tiffany said.

Benson had struggled with her own weight for years, she says at first she just didn't realize how Tiffany, and her older daughter Tiara were becoming overweight. Then, a family member caught Tiffany sneaking food.

"My brother-in-law was spending a night over, and he noticed that she was in the kitchen in the middle of the night," Benson said. "She was retrieving some foods after midnight, so the next day I explained to her that she was eating too much."

Now that Benson saw the problem, she researched options and decided Tiffany should go to a weight loss camp for children. But she couldn't afford the cost, an average $1,000 per week.

So Tiffany wrote a personal essay hoping to win a scholarship to Camp Pocono Trails, in northeastern Pennsylvania.

"I would rather lose weight than die from being overweight," Tiffany said, reading from her letter.

"Her essay, in my opinion, was the best one I'd ever seen. So instead of giving her three weeks, I decided to give her eight weeks," Sparber said.

The eight week campership was just the opportunity and support tiffany craved.

By halfway through camp it was clear that weeks of eating healthy portions and exercising were paying off.

"At your first weigh-in when you got here, you weighed 365 pounds, how much weight have you lost since then?" David asked Tiffany at that time.

"Twenty-six as of Sunday." Tiffany said.

"Are you surprised?" David asked.

"Her goal is to lose 50 pounds while she's here, do you think she'll hit that goal?" David asked Sparber.

At the end of camp three weeks later, Tiffany had lost an impressive 42 pounds.

When Benson saw her daughter for the first time in eight weeks, she was stunned by the transformation.

"Did you miss me?" Tiffany asked.

"I missed you, I love you," Benson said.

Tiffany did such a great job at the camp that the camp director promised she could attend next summer for free if she keeps the weight off. So far it seems like she will do that and more, since Tiffany came home she has lost an additional 13 pounds.