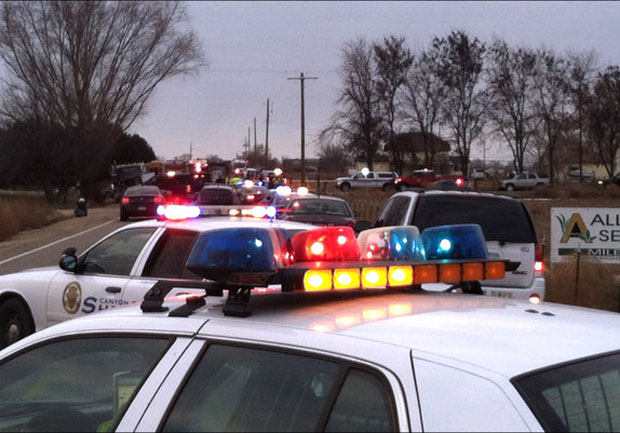 KUNA, Idaho -- Authorities say one child has died and four others were injured when a dump truck collided with a school bus carrying elementary school students in a small southwestern Idaho city.

Emergency crews are responding to the scene Thursday in Kuna, a town about 30 minutes from Boise.

Canyon County Sheriff spokeswoman Theresa Baker confirmed the death and said the parents have been notified. Baker says as many as 10 children in the sixth grade or younger were on a bus destined for Crimson Point Elementary School.

Baker said officials had not yet reached the parents of all the injured children. Officials did not immediately release the names or ages of the kids involved.

Joshua Schlaich, a spokesman for St. Alphonsus Regional Medical Center, said two of the injured children have been transported to the St. Alphonsus hospital in Boise and two injured children and an adult were taken to the St. Alphonsus hospital in Nampa. He said he could not release the conditions of the children, and he didn't have the condition of the adult. Paramedics at the scene said the adult was the bus driver, and while she didn't have physical injuries, she was emotionally distraught.

It's unclear whether the driver of the dump truck was injured, CBS affiliate KBOI reports.

The collision occurred at an intersection on a two-lane country road lined by homes and farm fields between Nampa and Kuna. Authorities say the dump truck was traveling north on Happy Valley Road, when the driver approached the four-way intersection with no stop sign for that road. The bus was traveling east on the intersecting road, which did have a stop sign.

Idaho State Police Sgt. John Burke said it's too early to determine what went wrong. Neither driver was transported to the hospital.

"We can't really speculate. We need to gather more information and continue the investigation," Burke said.

Burke said the initial investigation would likely take all day. Some of the parents were at the scene, while others were expected to meet their children at the elementary school.

"It's a horrible ... it's a terrible thing," Burke said. "The family (of the deceased child) is devastated. They need our prayers and all we can do is hope they can get through it."

Idaho Department of Education Spokeswoman Melissa McGrath said the Kuna School District runs its own bussing operation, meaning it buys the vehicles and hires its own drivers.

The last time a student died in a bus crash in Idaho was in Boise in 1969, she said.