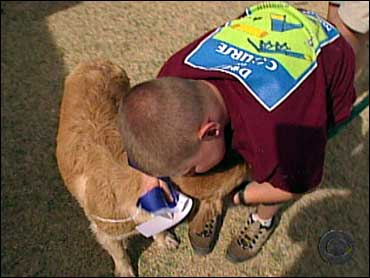 Eleven-year-old Parker Weishaar is just about the most well-behaved kid you'll ever meet — now.

Parker has a form of autism called Asperger's syndrome. CBS News correspondent Steve Hartman reports that one of the symptoms can be violent outbursts.

His parents, Wendy and Mark, "couldn't deal with it. We would have incidences in the classroom where he would kind of clear off the bookshelves."

They say they tried everything — but not until recently did they find something that really seemed to fix the problem.

"Almost instantly," they say of the transformation. "Some things changed right away and we'd each look at each other and go, 'Oh my goodness.'"

What worked for them was Candy. Not the sweet stuff — a dog … named Candy. She's a certified assistance dog whose job basically is to be with Parker; to stick right by his side, 24/7.

"She helps me, she calms me down, she lets me know she's there when I'm about to have a meltdown," Parker says.

Wendy and Mark got the dog about a year ago, and Parker hasn't had an outburst since.

But that's just half the story. Kids with autism have a lot of other issues, too — and for those, there's this: dog agility. Parker says it was "really, extremely tough" to learn at first.

Although it's generally the domain of middle-aged women, Parker's mom says the sport is also "great" autism therapy.

"You're doing speech therapy, you've got to get commands out … while you're running … and you've got to keep your body in control when you don't have good motor movement," says Wendy.

Part of dog agility is learning how to handle disappointment — especially with this dog. She had yet to actually finish a course. But Parker didn't seem to mind.

"Anybody who has autism, anybody in the world would just benefit from this," Parker says. "She's just like a healing dog."

Healing for Parker. The idea is still new and unproven, but for one boy, on one day, there was never any doubt his dog had some kind of magic.

During her last race, something got into Candy. The dog that had never finished the course before did every "through" and made every "over." It was an absolutely flawless performance.

Candy not only finished for the first time — she actually finished first, earning a kiss from Parker. That's the kind of autistic outburst he and his family can live with.