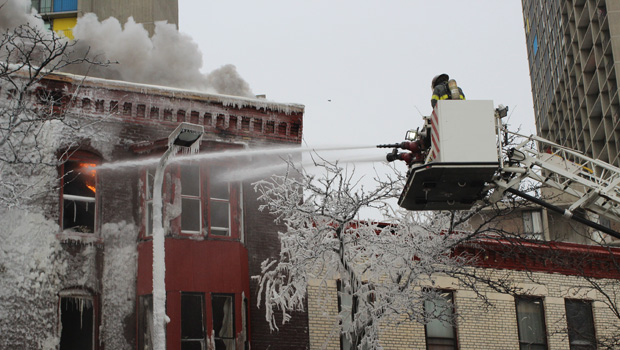 MINNEAPOLIS -- The body of a second victim was found Friday in the ruins of a Minneapolis apartment complex, bringing to two the death toll in an explosion and fire at the building.

The second victim was found around 10 a.m. Friday and the body was turned over to the medical examiner, the fire department said in a statement. The body of the first victim was found Thursday. Authorities have not released the identities of either victim.

Fire Chief John Fruetel said an investigation into the cause of the explosion and subsequent fire was ongoing. Investigators are focusing on a gas explosion as a possible cause due to the nature of the debris field and because some witnesses spoke of an odor, he said Thursday.

Becca Virden, a spokeswoman for CenterPoint Energy, said there were no natural gas leaks in the system and that the utility received no reports of a suspicious odor before the blast.

Fire officials say they received a call about an explosion about 8:15 a.m. Wednesday, and within minutes a fire raged through the three-story building. In sub-zero temperatures, paramedics responded to find victims on the ground, some with injuries that suggested they may have fallen multiple stories.

The apartment building, which also houses a grocery store, is in the heart of Minneapolis' Somali community. Before the bodies were recovered, several local Somalis spoke of the heartache of not knowing whether their loved ones made it out of the building alive.

Katra Ali Hethar, of Waite Park in central Minnesota, said her husband was among the missing. Her eyes watered and she was emotional as she spoke about the man who moved to Minneapolis because he was looking for work.

"I was talking to him that happy New Year's night, and that is something I can't get out of my head," she said through a translator, as she grasped her head with her hands. "I was told he might have burned in that building."

Hethar said her husband and his roommate were still missing. She was among several who said they went from hospital to hospital hoping to find them. She said police took DNA from her husband's sons, so they could positively identify any remains that were found.

Shareef Hassan said his friend was also one of the missing.

"I got heartbreak," Hassan said.

Mohamud Noor, executive director of the Confederation of Somali Community in Minnesota, said his group opened a fund to collect donations for victims and families.