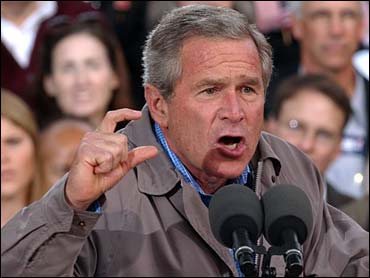 
How the West is going to be won has both presidential campaigns sweating. As President Bush and Democratic opponent John Kerry sprint through the Western Four battleground states – Nevada, Colorado, New Mexico and Arizona – the campaign is nearing a fever pitch, with just three weeks left until Election Day.

Historically, this is not Democratic country.
In the last 50 years, Nevada has only backed a Democrat in a presidential election three times, Colorado only twice and Arizona just once.

In New Mexico, Republicans were just as dominant until Bill Clinton came around, and since then Democrats have won the last three contests, though in 2000, Al Gore won by a mere 366 votes.

The four states combine for 29 electoral votes, two more than Florida, and Kerry is fighting for all of them. Besides Arizona, where polls show Mr. Bush with an advantage, Kerry is racing even with the incumbent in the rest.

In large part, the Western Four are viable for the Democrat because of booming populations, most of all among Hispanics.

A recent poll found that Sen. Kerry leads Mr. Bush by about 20 points among Hispanics in the Western Four, according to the Willie C. Velasquez Institute. Though the poll was completed before the first presidential debate, the margin would likely have to widen for the Democrat to win here.

Despite his 2000 efforts to court the Hispanic vote, President Bush has largely spoken to his base on his current Western trek. Colorado Springs, for example, where Mr. Bush addressed a rally Tuesday morning, is about as conservative as it gets.

Mr. Bush accused Kerry of trying to "obscure" his liberalism, saying the debates "showed differences between the senator and me on issues ranging from jobs to taxes to health care to the war on terror."

Since the first debate, Sept. 30 in Miami, Mr. Bush has shifted strategies. He is portraying Kerry as an out-of-touch liberal, leaving behind the "flip-flopper" terminology so favored by the Republicans throughout the election.

And there are no indications Mr. Bush will deviate from this new strategy heading into the third and last presidential debate, Wednesday in Tempe, Ariz. Following the rally, as the president left Colorado, the campaign seemed especially assured.

Possibly, but polls are split. The Mason-Dixon poll shows Mr. Bush ahead by 9 points, while the CNN/USA Today/Gallup shows the race even at 49-49.

Two factors in Colorado have the Bush-Cheney campaign nervous. One is a ballot initiative that could split the state's electoral votes. Since Colorado is still expected to favor Mr. Bush, a split of its electoral votes would likely benefit Kerry.

Also, Colorado has not fared as well economically as its neighbors to the West. Since Mr. Bush took office, the state has lost 68,800 jobs. The unemployment rate stands at 5.1 percent, an increase of 2.5 points since 2000.

If the Bush campaign is reluctantly battling it out in Colorado, it is skeptical of the Democratic claim that Kerry has a chance in Arizona.

"If Arizona is in play, then why did they pull all their ads off the air over the last month?" Dowd asks rhetorically. The latest poll, by the Arizona Republic, backs him up, giving Mr. Bush a 10-point lead.

As in 2000, New Mexico is the closest of the Western Four. Polls show a dead heat. In a good-old political dustup, both candidates were campaigning on the ground in the state Tuesday.

The president said Kerry "can run but he can't hide" from his liberal agenda. Kerry criticized Mr. Bush for ballooning fuel costs.

For Dowd, the tight race out West is where the Bush-Cheney camp found themselves four years ago.

"Nevada is just like last time, we only won it by a few points, and it was close all the last month," Dowd points out.

Though Nevada and New Mexico could go for either candidate, a win of both could tilt the Electoral College. Mr. Bush's chances are better than Kerry's.

But the unknown variable is Colorado's nine electoral votes. If they split, Mr. Bush must win New Mexico back to the Republican side, in order to maintain the same make-up that narrowly won him the presidency in 2000.