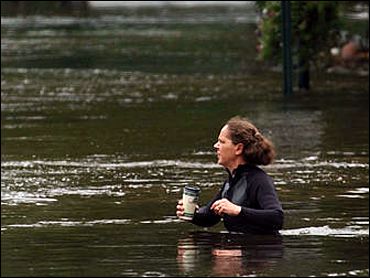 Residents in the Northeast braced for more heavy rain and flooding after some towns were hit with what meteorologists called once-in-a-lifetime storms.

Severe storms with the potential for more heavy downpours were forecast in New Jersey, Pennsylvania, Delaware and Maryland on Wednesday. Rainfall could reach more than 2 inches per hour, the National Weather Service said.

"That's up to Mother Nature," said Glenn Nickerson, who assisted with flood plan coordination in Burlington County, N.J. "All we can do is make sure Emergency Services is prepared."

The storm dumped over 13 inches of rain in a 12-hour period in Burlington County, located in southern New Jersey. It was classified as a 1,000-year storm, the National Weather Service said.

About 100 people who fled the rising waters in New Jersey remained homeless.

Tim and Peggy Welch evacuated their family in the middle of the night.

"We got the girls up and pretty soon the front door opened and the water started coming in, and we said 'we gotta get outta here,'" said Tim Welch. He expects the house in Lumberton to be a total loss.

The National Guard is protecting the area, reports Brzezinski, and there is severe damage to the town's infrastructure. More rain is expected Wednesday.

In Maryland, flood waters damaged about 80 homes, and road flooding and bridge damage closed major highways and secondary roads, tying up traffic through much of the day. Crews worked to clear more than 100 trees downed in Elk Neck State Park and the nearby state forest.

Tammy Spiese was trying to clear debris on her property near Reading, Pa., when rising water carried her into a drainage pipe. She had to be pulled out by her husband and a police officer.

"I was in the water up to my neck," Spiese said. "It was very powerful and I had to hold onto the rocks above."