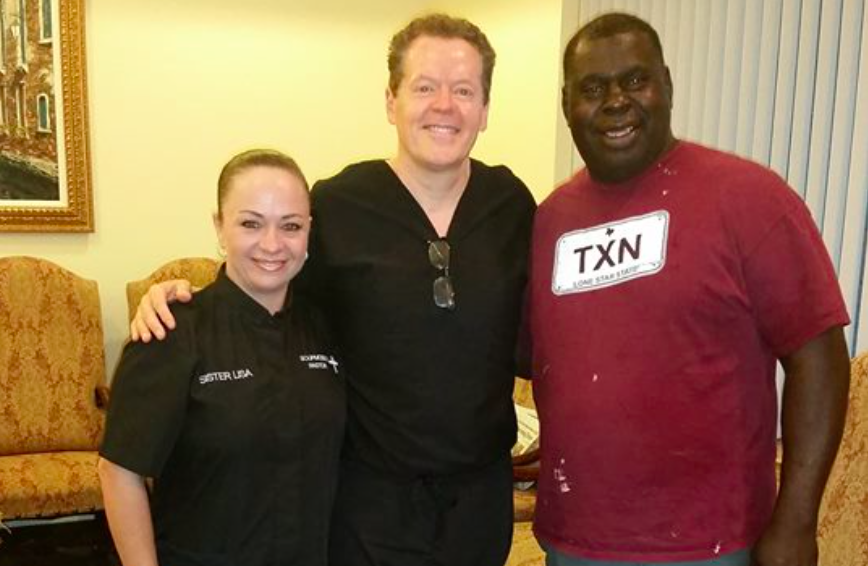 Harvor Davis was standing in line behind hundreds of homeless people waiting for his turn to get food when he noticed a man with a huge smile on his face.

He turned to a friend and asked, "Who is that?"

Davis was surprised to find out the man, who appears as if he was just like everybody else, was actually the executive director of the nonprofit SoupMobile -- a food service that brings food to the homeless in the Dallas area.

With a nervous grin and a mumble, Davis asked David Timothy if he could volunteer.

Without giving it a second thought, Timothy put him to work.

Five years later, Timothy told CBS News the man he found living in the back of his pickup truck is now the senior warehouse manager.

The job keeps David grinning. But there's still one thing missing: his smile.

"Within this huge giant of a man is just the kindest heart you could ever imagine," Timothy said. "The kind of guy you meet once in a lifetime."

That's why he decided to ask Dr. Lee Fitzgerald, who has been his personal dentist for more than a decade, for some help.

"I went to him and said, 'Lee, I have this amazing guy. Here's his story: He's never been to a dentist in his life --teeth are rotting, can't eat, won't smile. If anybody deserves some help with this, it's him,'" Timothy said.

"When you meet someone like Harvor -- it's easy to say yes," Fitzgerald, of Forte Implant Center in Plano, Texas, said.

It was almost $50,000 worth of dental work for free, Timothy estimated.

"He's a very humble, kind, very appreciative person," said Fitzgerald, who has been practicing dentistry for about 30 year. "Some people you do something nice for, they have the sense 'you should have done it for me' -- he's not like that at all."

During the initial surgery, all of Davis' top teeth were removed and he was given six implants. It will take about three months before he returns for more work.

"It's not just the teeth [that will change his life] -- it's the self esteem," Timothy said.

Immediately after, Davis ran to the bathroom, looked in the mirror and smiled. He no longer saw a man with rotting, missing teeth.

"I jumped back and was like, 'Who's that? Who's that guy staring back in the mirror?'" Davis said, with a chuckle. "I call it the 'million-dollar smile.'"