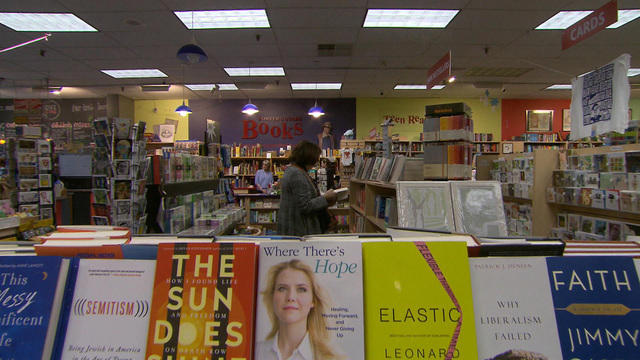 On a Thursday night in La Grange, Illinois, comedy fans were all but rolling in the aisles, which is good news if you're selling what's in those aisles. In this case: books.

So, what is the connection between a bookstore and a comedy show?

"We host a lot of different events," said Becky Anderson, a co-owner of Anderson's Bookshop. "It's good for business, but it's also good for our community. A lot of times, people will say, 'You know what? You're my entertainment!'"

Anderson's Books began as a pharmacy and has been in her family for five generations. It's now a successful small chain in the Chicago area.

Between 2009 and 2015, more than 570 independent bookstores opened in the U.S., bringing the total to more than 2,200; that's about a 35 percent jump after more than a decade of decline. The surprise recovery may hold lessons for other small retailers.

"I often say, these are stories of hope," Raffaelli laughed.

He set out to explain why the number of independent bookstores has been growing every year since 2009, despite cheaper, more convenient ways to buy books online, in national chain stores, and with e-readers.

"When you get into these things you start to really go deep, you know, like an anthropologist for business," he told correspondent Tony Dokoupil, "and certainly for how markets change and evolve over time."

What Raffaelli found is that successful bookstores, like Anderson's, win with a local appeal, a curated selection, and as many as 500 events a year.

"So, buying a book becomes an act of community-building as opposed to just a consumer purchase?" Dokoupil asked.

"Yeah, oh yeah, for sure," Anderson replied. "You talk to people, have someone treat you like a friend, and something they love, they're going to share with you, too, and you're going to love it, too. You can't get that online."

Porter Square Books, in Cambridge, Massachusetts, is another success story, says co-owner David Sandberg. He once worked at Google, and bought the store five years ago.

"When I told my friends at Google, 'I'm leaving 'cause my wife and I are buying a bookstore,' the universal reaction was, 'That is so cool. Is that really a good idea?'" Sandberg laughed. "Because there is this narrative of we're under fire, we're getting killed.

"That's not the narrative now."

It helps that many bookstores sell more than just books.  How about some novelty socks, or a cat massager?

"The margins are better on gift products, on toys, than they are on books,' Anderson said.

But books -- real, physical books -- are still the main attraction, which is perhaps the biggest surprise of all.

"You can read on your phone, but we're finding that so many people spend so much time on devices, that when it comes to reading for pleasure, they don't want to read from a device," Anderson said.

"The best thing about a book is you can't get email on it?" asked Dokoupil.

"You can't put it up to your ear!" she laughed. "Print books are really that perfect thing."

And by Professor Raffaelli's calculations, today's independent bookstores have evolved to something special through a kind of natural selection – the ones that have survived may be the fittest in a Darwinian sense.

"I think not only are they the fittest, but they've also been sensitive, and had the ability to adapt, and reactivate some of the values that were there that may have been muted in a race towards trying to have the cheapest and largest inventory," Raffaelli said.

"But do you realize, if what you're saying is true, that means we have the very best bookstores of all time today?" asked Dokoupil.

He replied, "I think that's right."