Over the years, booming oil prices helped turn Dubai into a land of opportunity and playground for the ultra rich.

But that was then and this is now. And as CBS News correspondent Sheila MacVicar reports, even Dubai is feeling the pinch of the worldwide economic crisis.

The gulf city state's property prices went up as fast and as high as the towering buildings. But reality has suddenly intruded.

One investor said it was as if someone had thrown a switch, as the global credit crunch slammed a city that was, in effect, the world's biggest construction site

It took just 20 years for Dubai to go from a desert outpost with a handful of office towers to a world metropolis, where one fifth of the world's cranes operate, and property became a very hot commodity, with some people playing real estate the way others play poker.

"People were buying and flipping properties on a launch basis," says Manesh Khadri of Century 21 Real Estate. "You launch a property and you flip it within the same day."

Before an apartment was even built you could away with tens, or even hundreds of thousands of dollars.

Developers promised: Pay $140,000 for an unbuilt apartment, and within six months, reap a $46,000 profit. So as fast as the city expanded, investors snapped up the real estate, taking on big debt.

But, "I really did not know what risk was until I came here," Panjwani says. "I mean Dubai is like Silicon Valley on steroids from a risk perspective."

Buying real estate with little money down and lots of debt is risky indeed. Panjwani saw trouble coming and got his cash out of the market. 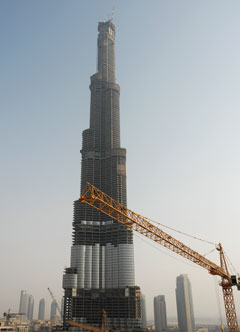 Take the world's tallest building, the Burj Dubai, which remains under construction. In the last month prices there dropped at least 50 percent.

House prices on the man-made Palm - the iconic frond-shaped island colony - down 40 percent.

Banks aren't lending. Projects are shelved. And the normally secretive government has had to acknowledge it has one of the highest levels of per-capita debt in the world -- and not enough oil to pay for it.

"The worst is still yet to come in the sense of people losing properties" Khadri says. "That will happen."

Of course, Dubai will come back eventually, many say, perhaps without the speculators and the insane price increases. So while the fizz might be gone, they insist, the water still sparkles.