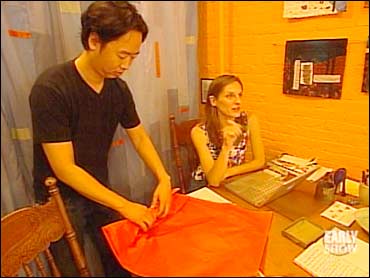 Searching for information or Web addresses from September or August segments of The Early Show? If those segments don't have their own, complete stories on CBSNews.com, you'll find that info and/or those Web addresses right here.

Forget about draping a tablecloth over a folding table: This children's playhouse is serious real estate. With leather furniture, electricity, windows that open and shut, "Nicki's Colorado Ranch House," based on the "American Girl" character, is nicer than some vacation homes.

If you have an "American Girl" fan in your house who would appreciate this special play space, then it can be yours when it's auctioned off to benefit HomeAid.

HomeAid is a leading national non-profit provider of housing for today's homeless. The organization builds and renovates multi-unit housing facilities for charities such as Boys Hope Girls Hope, Mercy House, Salvation Army, Volunteers of America, YMCA, and others so they can help America's temporarily homeless rebuild their lives.

HomeAid has built more than 145 multi-unit facilities with an additional 60 in development. These homes provide more than 4,000 beds per night nationwide (each bed serves an average of three people per year). For further detailed information about HomeAid visit www.homeaid.org.

To take a tour of the Nicki playhouse,

For more information on the project and the auction, go to www.projectplayhouse.com.

You know the old saying, "Never mix business with pleasure"?

That's a particular challenge for spouses who are also business partners.

Relationship writer and Early Show contributor Amy Kean talked to couples who work together, including two people who still do, even though they got divorced! Kean also offered advice for viewers doing or mulling it. Working together, that is!

For more on some people featured in Kean's segment, visit these Web sites:

Does your husband change diapers? If not, maybe a "manly" diaper bag will put him in the mood!

These days, Early Show contributor Amy Kean explained, there are plenty of products on the market for modern dads, to enable them to be be both hands-on, and hip!

Among the offerings mentioned by Kean:

Gary Drevitch is a work-at-home dad who writes about parenting issues (www.freelancedad.com). He says fathers today want to be hands-on.

Chris Pegula, a father of three, designed his own line of hip diaper bags for, well, "dudes!" "Diaper Dude (www.diaperdude.com)," he says, "is a diaper bag that was designed specifically for dads. … Essentially, it's a messenger style diaper bag for dads. … "(It) comes complete with padded changing pad, and a removable cell phone holder."

Artist and "hipster" dad Toland Grinnell is featured as this month's "Smart Cookie - Fathers of Invention," in the September issue of Cookie magazine (www.cookiemag.com). Grinnell also started a line of diaper bags, Mr.B Family Bags (www.mrb-nyc.com). But don't call them "diaper bags" -- he'd prefer you think of them as "family portage."

Ali Wing, CEO and founder of "giggle" (www.egiggle.com), told Kean, "Men are as much a part of our customer base as moms. ... They care about gear. ... Twenty years ago, dads were the credit card in the process. And now ... they're very engaged and active participants in the decision about what products they'll have as a parent."

To watch the Kean segment,

Hooked On Phonics, which makes a variety of products designed to help kids learn to read, is marking its 20th anniversary with a ten-city, "HOP Across America" bus tour, which the company launched on The Early Show.

As Hooked on Phonics President Chip Paucek explained, the company will be giving away $1 million in products during the tour to literacy programs throughout the nation, including First Book, a national nonprofit organization that gives children from low-income families the opportunity to read and own their first new books. First Book Senior Vice President Lynda Lancaster joined Paucek on the show.

To watch the segment,

In "the old days," many Americans would get a job, work for 40 years, then retire somewhere in the Sun Belt.

But, says AARP The Magazine, today's retirees want to stay where they are - 90 percent of them, according to one estimate.

The latest issue looks at some of the best cities for aging baby boomers.

"It used to be these snow birds couldn't wait to be permanent snow birds, but not anymore," remarked co-anchor Maggie Rodriguez to AARP Publications Editor in Chief Hugh Delehanty on The Early Show.

"Right," he responded. "That's the old 'Boca (Raton, Fla.) Paradigm,' as I call it, and that's so 20th century! Basically, what it's being replaced by the 'Barcelona Paradigm,' which is living in a rich, cultural city with lots of walkability, and a place where you can age gracefully, but not feel old. But people don't want to move to Barcelona, they want it in their backyard. That's what's happening now.

"We focus on five cities that are actually, you know, really ahead of the curve on this. And basically, what we talk about is a livable city, is someplace that has good transportation, walkability. You don't have to be a slave to your car."

Other criteria include access to good health care, wide variety of affordable housing, and lots of cultural and fitness activities.

To see which cities the magazine chose, and read the entire article, click here.

To watch the Early Show segment,