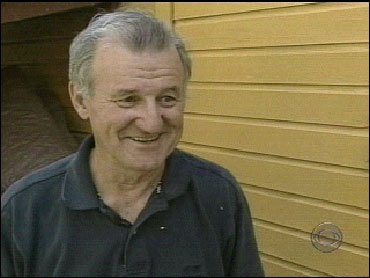 This time the random toss of a dart landed him in the upper Midwest and by the statue of the world's most famous lumberjack. In a phone booth located under the legs of a gigantic blue cow, he stumbled on another larger-than-life character: Alan Gunsbury.

Although Gunsbury can't fell a tree with one swing of his ax, he can cut quite a swath -- with just one pass of his mighty Lawnboy.

At 69, he is still the maintenance man at Quarterdeck Resort on Gull Lake; he's also the owner of the resort. He and his wife Jane have had the place for 25 years.

And boy did it; the place came furnished with plenty of headaches: endless chores. They almost went bankrupt once. But Alan Gunsbury has somehow managed to remain upbeat through it all, even during his darkest day there.

For years the cornerstone of this resort was its restaurant with the big deck overlooking the lake. And a trademark wooden Captain Hook up by the reception desk. It was the quintessential Minnesota supper club. Until four years ago ...

"When you have a fire, it's almost like the death of a person," says Jane Gunsbury.

The cause was lightning. The next day, employees showed up sobbing, customers stood in shock and then there was Alan Gunsbury -- going off like he's Dale Carnegie.

"Don't make it bigger than what it is. That's wasted energy," he says, "An obstacle is a stepping stone to success."

But to his wife, his attitude "was kind of almost infuriating," she admits.

Even the local paper noticed that Alan Gunsbury wasn't exactly the picture of "dejection."

In fact, Alan Gunsbury flat out refuses to ever let anything get him down.

"He's so positive he drives you crazy sometimes," his wife says.

And along with her kids, she has not seen him down. If you're wondering how he does it ...

"Because it can always be worse," Alan Gunsbury says.

At the age of 9, he lost his mother to cancer and his father to a 70-hour workweek.

"He just simply said 'your mother passed away and you're going to be on your own. And you're just going to have to make believe I'm there all the time.' And that's all there was to it,'" Alan Gunsbury recalls.

He says he never cried and has been snubbing sadness ever since. So, if you visit his resort, enjoy the new restaurant, say hello to the old Captain Hook, but don't dare so much a complain about the weather. Unless you're prepare for the standard lecture.

"You know what those clouds represent, your damned attitude. The sun is shining. Get the clouds out of your head," says Gunsbury.