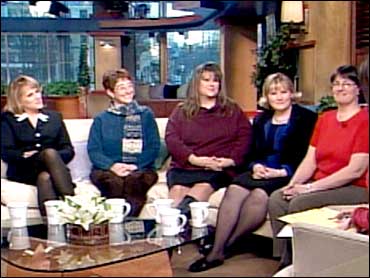 What a difference a year makes!

Remember, the women of Weight-Off? The Early Show caught up with Marge Variano, Betsy Solomon, Chris De Paz, Georgia Butor –Pavelock and Lucretia Cortright to find out if they are still on the road of weight loss.

There are so many questions to ask. Did they lose or gain weight? Did they change diets or remain faithful to the ones they were following last winter? And did their attitude toward their bodies and life in general change?

Four of the women have continued to lose weight and maintain a food/exercise plan. Marge still is a fan of The Zone. But she made some changes along the way, she says, "I tried the South Beach Diet for a short time. I did lose weight on it, but it didn't keep off as well and I missed the things you could have on The Zone. I like The Zone because you could eat pizza, ice cream, things that you can't have on South Beach."

Chris stuck with Atkins. She says, "I really didn't like it after we ended the program, but it worked. And after you get into the routine of it, it's real easy."

Lucretia is also eating healthier. Though she's not doing Weight Watchers any more, she is committed to losing weight. She's currently following the South Beach Diet and is doing well.

She notes that following Weight Watchers was not easy for her, "I gained a little bit of weight back. But then I switched diets. I switched to Atkins and now I'm currently on South Beach. I read the South Beach book and I liked the thought of being able to eat some more vegetables. So pretty much the same idea of low carbs and high protein."

Betsy has gained back about 10 pounds. She had the least amount of weight to lose to get to goal. But those last few pounds are the most stubborn, she says. So she's readjusted her thinking: the initial goal she set for herself may not be a realistic one.

"Cheesecake is part of a self-designed plan and it tastes much better than lettuce," she says. Exercising has been hard for her to do, as well, "I didn't have the nerve to totally give it up, because it's definitely part of the plan."

And a very important part of losing weight for Georgia in particular. Like Betsy, exercise was not her favorite thing to do. But now, things are different. She says, "It's fun to get out and actually bring your kids with you and have something in common to do. It's a lot of fun. And it gives you a better sense of yourself."

All of the women have grown emotionally. They aren't as obsessed with the number on the scale. They are happier with themselves and what they've achieved and what they are doing. They are more process- and less goal-oriented.