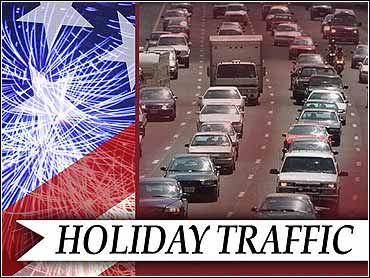 Despite a sluggish economy and an Independence Day holiday that falls in the middle of the week, some 36.6 million Americans are expected to hit the road Tuesday and Wednesday.

Mantill Williams, director of public affairs for The American Automobile Association says this figure would have been even higher, except that travel is being spread out during the whole week this year, rather than just concentrated on one long weekend.

Holiday drivers are being advised to leave plenty of time for their journeys, to plan alternate routes and to pull off the road if they feel sleepy. Police in many states are adding extra patrols to deal with those who drink and drive.

Gas prices have eased off of their highs of earlier this season, but still remain above last year's levels. Supplies appear to be plentiful.

And if you are among those who waited until the last minute to make holiday plans, Tom Parsons. CEO of Bestfares.com, has some good news. There are some real air fare deals available at the last minute as carriers try to fill up their flights. A lot depends on the airport you use and the destination you choose, he said.

Even international flights are being discounted now, as they were not just a few weeks ago, he said. He also he expects even better deals in the fall when the busy summer travel season ends.