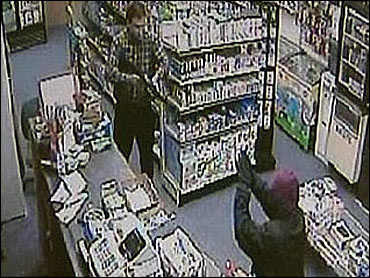 A rifle-toting convenience store owner said he decided to show mercy on a would-be robber after seeing the man collapse into tears and claim he was only committing the crime to support his starving family.

The Long Island store owner provided the bat-wielding man with $40 and a loaf of bread and made him promise never to rob again.

"This was a grown man, crying like a baby," Mohammad Sohail, owner of the Shirley Express convenience store about 65 miles east of New York City, told The Associated Press in a telephone interview on Tuesday.

The man dropped the bat, picked up the bread and tucked the $40 into his waistband before fleeing, said Suffolk County police Sgt. John Best.

Sohail, who moved to the United States from Pakistan about 20 years ago, said he was getting ready to close his store shortly after midnight on May 21 when the man in his 40s entered with a bat in his hand. Sohail said he tried to stall for a moment and then grabbed a rifle he keeps behind the counter and ordered the assailant to drop the bat.

The would-be thief dropped to his knees and begged for forgiveness, Sohail said.

"He started crying that he was out of work and was trying to feed his hungry family," he said. "I felt bad for him. I mean, this wasn't some kid."

He said he tossed $40 to the man, who then stood up and told Sohail he was inspired by the act of mercy and wanted to become a fellow Muslim. Sohail said he led the man in a profession of Muslim faith and the two ended up shaking hands.

"He said he wanted to convert to Islam, that he wanted to be Muslim like me," Sohail told CBS-2 in New York, pointing to the video. "See? He is raising hand here, and taking oath."

Sohail said he went to the back of the store to get some milk to give to the man, but when he returned the man had fled. He said he called police and reported the attempted robbery, but he doesn't want to press charges if the man is ever caught.