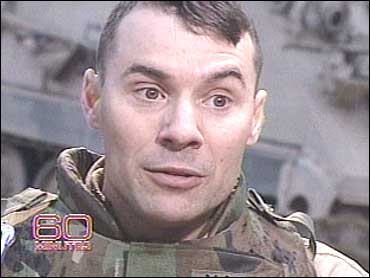 For an American soldier in Iraq, there is no more dangerous neighborhood than what has come to be known as the Sunni Triangle, the area west of Baghdad, around the town of Fallujah.

American soldiers are fighting a classic counter-insurgency, but if they are ever to win it, the first thing they will have to do is pacify this key piece of Iraqi real estate. Correspondent Christiane Amanpour reports.

Few battalions have suffered as many casualties as part of the 1st Infantry Division, which is stationed in the heart of the Sunni Triangle, not far from Fallujah.

And few platoons have been hit as many times as Sgt. Joseph Mosner's.

"When you see a friend hurt or even get killed, as a person, it hurts. You try to hold this image that you're a man, you don't have feelings, but you get teary-eyed," says Mosner.

"You lost one of your friends. But as a soldier, you get a little nervous because now you've seen something happen that can happen to you."

And it did. Just three weeks after 60 Minutes rode with Sgt. Mosner on a mission, he was seriously wounded by a remote-controlled bomb.

But what Mosner wants most now, while recovering at Walter Reed Army Medical Center in Washington, is to be back in Iraq with his platoon.

"You feel kind of bad because your guys are over there and you are not, and they are putting themselves in danger every day," says Mosner.

Maj. John Nagl is the battalion's operations officer. Nine of his men have been killed and 59 have been wounded. Nagl is a counter-insurgency expert. He's written a book on it, and now he's putting theory into bloody practice -- trying to stop the deadly attacks on his troops.

"Our enemy is dastardly, cowardly, but damn good. I was a tank platoon leader in the First Gulf War, and it was, in comparison to this, a very easy war to fight. In this war, the enemy doesn't wear uniforms, doesn't fight using conventional tactics. He will fight us, then disappear, fire a few shots, drop his weapons and merge into the crowd," says Nagl.

"You're left with a very unpalatable choice at that point. You can fire indiscriminately into the crowd, making the war bloody, messy, or you can do what we do -- you hold back, circle the crowd, you gather intelligence and try to find out who it was."

But it's easier said than done, because in the Sunni Triangle, it is not easy to determine who is a combatant and who is not. And this sometimes results in unintended consequences that the military says it can't avoid. Civilians sometimes get caught in the crossfire. They get shot, or worse, they get killed.

Last April, when a crowd was demonstrating against the American presence in Fallujah, at least 15 of the protesters were killed by U.S. troops. Since then, the Army has had an increasingly difficult time putting down the insurgency.

The imam of Fallujah's main mosque was arrested for inciting violence against the Americans, but his deputy keeps up the stream of vitriol out. Even though they are hunted down by overwhelming U.S. force, the militants are bold enough to fire rocket-propelled grenades at soldiers on a night raid.

Today, when American forces enter Fallujah, they are greeted by graffiti that says Fallujah will be America's graveyard.

The 82nd Airborne is in charge of Fallujah. Lt. Col. Brian Drinkwine says this is not a place you can handle with kid gloves: "The enemy is like a cancer. It has had 35 years to grow. When you have someone who has cancer, you go and carve out the heart of it. If you just turn away from it, it will continue to grow and it may grow back stronger."

While 60 Minutes was in Fallujah, five more residents were being buried after an incident that makes clear how different both sides' versions of these events often are.

One night, a family who sells chickens in Fallujah's market was attacked while delivering their goods. American soldiers, believing they were under attack from insurgents, fired hundreds of rounds into the family's truck.

"I came face to face with terror, bodies sprawled on the ground," says Jaseem Hamed, head of the family. "My truck destroyed, dead chickens scattered about. I couldn't believe my eyes."

Hamed says he saw the bodies of his two sons lying in the truck: "We never carry guns, because we know there are often American checkpoints along the way."

The Americans, however, say they thought that they were under attack by militants. "That's impossible. It was a truck full of chickens and kids," says Hamed. "Do you think these kids would attack American soldiers?"

One of those children was still missing, even though the family has spent two weeks searching through local hospitals.

The incident happened in Nov. 11, 2003, and the next day, an Army press release said that paratroopers had successfully defended the Jordanian hospital and their own forward base from an attack by Iraqi combatants. In total, soldiers from the 82nd Airborne killed six aggressors and wounded four others.

When 60 Minutes asked the brigade commander, Col. Jeffery Smith, to tell us what happened that night, he said he didn't know of any children who were killed in the incident.

"The truck that is in question did engage our patrol with a weapon. Could they have been innocents civilians," asks Smith? "I don't know, I mean, I cannot explain why the truck fired on us."

Is it possible that, because of previous threats, the soldiers felt so at risk that they fired on the truck?

"The answer is no. This truck that is in question engaged this vehicle," says Smith, who wasn't aware that a 9-year-old child was among those killed in the attack. "There was no mistaken identity and there was no mistake on who was firing on who."

60 Minutes asked Col. Smith to check again to see if there were children in the truck that night. Before we left, he came back with new information.

"I'm saddened to report to you that our subsequent communication with the battalion that was involved in this incident indicates that was at least one child that was killed in the truck," says Smith. "We understand right now that there may have been a second child involved or in the vehicle, and we are going to continue to investigate to find out where this child is."

It's Lt. Col. Marshall Hagen's job to investigate incidents that involve his troops.

"That incident and that truck goes back to Sgt. Smith's right to self defense. He saw muzzle flashes coming from that truck, he defended himself and his Bradley crew," says Hagen. "If there are civilians in there, it's unfortunate and it's a tragedy. If we receive fire, we will return fire."

Hagen says he, too, did not find out, until yesterday, that a child had been killed in the attack: "The fact that children were killed and I didn't know about it is an anomaly."

What is also unusual is that even amongst the Americans in Fallujah, there were different interpretations of the incident. Capt. Ryan Huston is the community liaison officer from a neighboring unit. His translator is related to the chicken vendor's family.

Ahmed, 13, was in the American military hospital in Baghdad and reunited with his mother. He tries to comfort her and assure her that he will be able to walk again soon. But when he asks for his father and younger brother, his mother can't bear to tell him that they were killed in the shooting.

Huston says the Army now has to try to win back at least this family's hearts and minds: "If we attack it the right way, by making sure they are taken care of admitting our mistake and making sure they get compensated, I think it really helps out by their culture. It eases some of the pain and it shows respect to them."

The Army has not admitted that they made a mistake when they fired on the chicken truck, even though they have paid Ahmed's mother $2,000 for his injuries and for the death of his younger brother. But so far, the family has not received compensation or an apology for the three adults who were killed in the shooting.

What will they do if they don't get compensation or an apology from the Americans? Will they take revenge?

And so another milestone is marked on the trail of bad blood that divides ordinary Iraqis from the Americans who came here to help them. And this is something that Sgt. Mosner ponders as he gets patched up for another tour of duty. .

"A lot of people like us over there, and, of course, a lot people don't like us, and I think our presence is needed over there," says Mosner. "I think we are doing a good thing. People are getting hurt, but we need to be over there."