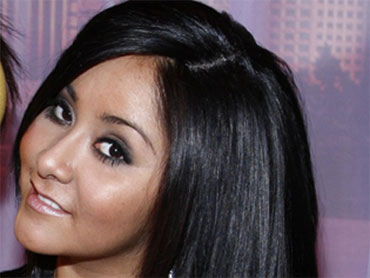 MTV says you can expect to find its "Jersey Shore" star Snooki in Times Square on New Year's Eve.

In fact, MTV says it plans to put 23-year-old Nicole "Snooki" Polizzi inside a ball that it will drop in Times Square to ring in 2011 as part of its "MTV New Year's Bash" special.

The network says other stars from its hit reality show "Jersey Shore" will lead the crowd in a collective fist pump in hopes of breaking the Guinness world record.

The live hourlong show will also include a pair of performances from Flo Rida and a recap of the year in entertainment.

Comedian Whitney Cummings will host the special, set to air Dec. 31, from 11 p.m. to midnight.

One of the "Jersey Shore" breakout stars, Snooki has appeared on TLC's "Cake Boss," been parodied on "Saturday Night Live" and "South Park" and has handed out an award at the 2010 CMT Music Awards. This summer, she pleaded guilty to criminally annoying behavior at a Seaside Heights (N.J.) beach and was fined $500 and sentenced to community service.