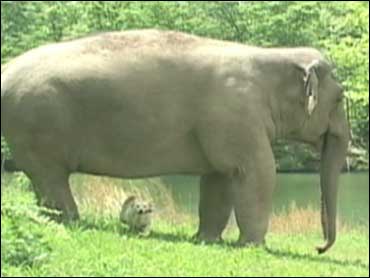 When elephants retire, many head for the Elephant Sanctuary in Hohenwald, Tenn. They arrive one by one, but they tend to live out their lives two-by-two.

"Every elephant that comes here searches out someone that she then spends most all of her time with," says sanctuary co-founder Carol Buckley.

It's like having a best girlfriend, Buckley says - "Somebody they can relate to, they have something in common with."

Those are pachyderm-pachyderm pairs. But perhaps the closest friends of all are Tarra and Bella.

That would be Tarra the 8,700 pound Asian elephant. And Bella. The dog.

"This is her friend," Buckley says, scratching Bella's tummy. "Her friend just happens to be a dog and not an elephant."

(Scroll down to watch the video.)

Bella is one of more than a dozen stray dogs that have found a home at the sanctuary. Most want nothing to do with the elephants and vice versa. But not this odd couple.

Tarra and Bella have been close for years -- but no one really knew how close they were until recently. A few months ago Bella suffered a spinal cord injury. She couldn't move her legs, couldn't even wag her tail. For three weeks the dog lay motionless up in the sanctuary office.

And for three weeks the elephant held vigil: 2,700 acres to roam free, and Tarra just stood in the corner, beside a gate, right outside that sanctuary office.

"She just stood outside the balcony - just stood there and waited," says Buckley. "She was concerned about her friend."

Then one day, sanctuary co-founder Scott Blais carried Bella onto the balcony so she and Tarra could at least see each other.

"Bella's tail started wagging. And we had no choice but bring Bella down to see Tarra," Blais says.

They visited like that every day until Tarra could walk. Today, their love -- and trust -- is stronger than ever. Bella even lets Tarra pet her tummy - with the bottom of her enormous foot.

They harbor no fears, no secrets, no prejudices. Just two living creatures who somehow managed to look past their immense differences.

Take good look at this couple, America. Take a good look world. If they can do it - what's our excuse?