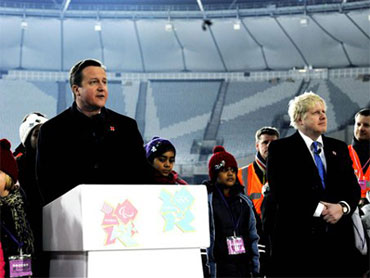 The lights were turned on for the first time at London's 2012 Olympic Stadium on Monday.

With one year, seven months and seven days remaining until the Games begin, British Prime Minister David Cameron pushed a button that switched on the towering floodlights over the snow-covered stadium in east London.

London Mayor Boris Johnson, Olympic organizing chief Sebastian Coe and dozens of local schoolchildren were among those attending the ceremony in freezing temperatures inside the mostly empty 80,000-capacity stadium.

"Today we're shining a light on this stadium and the brilliant work that's been done on the Olympic Park so far," Cameron said.

The stadium has 14 light towers reaching 230 feet above the field of play, supporting a total of 532 individual lights.

The Olympic Delivery Authority also announced that the installation of the spectator seats has been completed and the stadium remains on track to be completed next year.