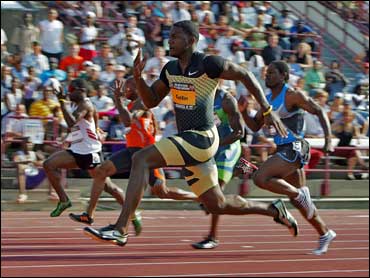 Sprinter Justin Gatlin agreed to an eight-year ban from track and field Tuesday, avoiding a lifetime penalty in exchange for his cooperation with doping authorities and because his first positive drug test was deemed an honest mistake.

He will forfeit the world record he tied in May, when he ran the 100 meters in 9.77 seconds. At age 24, the lengthy ban would all but knock Gatlin out of competition for the rest of his life.

Gatlin tested positive in April for testosterone or other steroids, five years after his first positive test, which was for medicine to control attention-deficit disorder. Under the World Anti-Doping Agency code, a second doping offense calls for a lifetime ban.

But Gatlin reached a compromise with the U.S. Anti-Doping Agency, which levies doping penalties in America. Under terms of the compromise, he can still appeal to an arbitration panel in the next six months to have the term reduced.

He cannot, however, argue that the test was faulty.

"To his credit, it's recognition that the science is reliable," USADA general counsel Travis Tygart told The Associated Press. "Instead of wasting a bunch of resources attempting to create smoke where there's not any, he's acknowledging the accuracy of the positive test, and in exchange for his agreement to cooperate, we've recognized the nature of his first offense."

That offense came while Gatlin was in college. He stopped taking the ADD medicine a few days before competition, but it did not clear his system. He received a two-year ban for that test, which was reduced by a year because of the "exceptional circumstances" of the offense.

"The nature of Gatlin's first offense for use of his medication puts this violation in a unique category," said USADA chief executive officer Terry Madden.

Gatlin has said he didn't know how steroids got into his system this time.

His coach, Trevor Graham, who's been involved with at least a half-dozen athletes who've received drug suspensions, has contended Gatlin tested positive after a vengeful massage therapist used testosterone cream on the runner without his knowledge.

Gatlin's attorney, Cameron Myler, hasn't acknowledged that allegation. She did not immediately return messages left by the AP.

"While we are glad Justin has taken responsibility for his positive test and will cooperate in USADA's anti-doping efforts, we are sorely disappointed in him," Craig Masback, USA Track and Field's chief executive officer, said in a statement.

USADA looks at this as a significant compromise — and the arbitration process could bring Gatlin back much sooner than eight years.

USADA has a history of offering leniency to those who help in its fight against doping. Though the agency doesn't name names, Gatlin could possibly help USADA by providing information on Graham, who has denied any direct involvement with performance-enhancing drugs.

"He accepted liability," Tygart said. "He agreed not to raise technical arguments or frivolous defenses. He has an opportunity to go to a panel of arbitrators and argue exceptional circumstances."

In this case, the exceptional circumstances could be that he was sabotaged, or has no idea how the steroids entered his system.