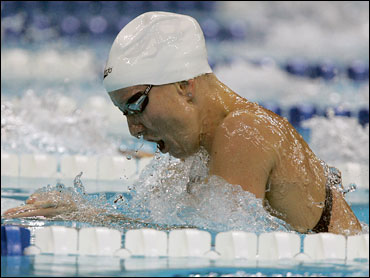 The hopes and dreams of Olympic glory for U.S. swimmer Jessica Hardy could be dead in the water before the Beijing Games even begin after a positive test for a banned stimulant earlier this week.

"I have no idea how it happened," Hardy told CBS' The Early Show Friday.

The 21-year-old from Long Beach, Calif. holds the world record in the 100-meter breaststroke and had qualified for the 2008 Olympics in that event along with the 50-meter freestyle and the 400-meter free relay.

Hardy's case involves Clenbuterol, banned nearly two years ago by the International Olympic Committee. It is one of five anabolic agents on the World Anti-Doping Agency's prohibited list. Although it has anabolic properties, it is not an anabolic steroid.

Hardy said she had never heard of the drug and was in "complete shock" when officials phoned her Monday of the positive drug test. "I was devastated," she told The Early Show.

Clenbuterol is not approved for use in the U.S., although it's accessible via the Internet and is popularly used for weight loss. It's legally used in American horse racing because it can increase lung capacity, although it must clear a horse's system within a prescribed time before a race.

Hardy was tested three times between July 1 and July 6, but only tested positive once during the trials, on July 4, the date of her second test, the swimmer's attorney, Howard Jacobs, told CBS News.

Clenbuterol is approved in some countries by prescription to help asthma patients breathe easier.

"It's a complex drug," said Dr. Don Catlin, who oversaw testing for anabolic agents at the 1996 Atlanta Olympics and who ran the country's first anti-doping lab at UCLA for 25 years. "We know very little about it."

In September 2006, more than 300 people in Shanghai were poisoned by eating pork contaminated by Clenbuterol that had been fed to the animals to keep their meat lean.

"It can be pretty toxic," Catlin said. "There have been some epidemics where human beings have ingested it by ingesting meat and that has given them some pretty bad reactions. That's surely one of the reasons it doesn't get into the U.S."

With the games just two weeks away, the chances Hardy's tests will be overturned appear increasingly slim. If upheld, Hardy will be banned from the 2008 Olympics, which would have been her first, and could also prohibited from competition for two years.

"I know that I am innocent," Hardy said, "we just have to prove it."