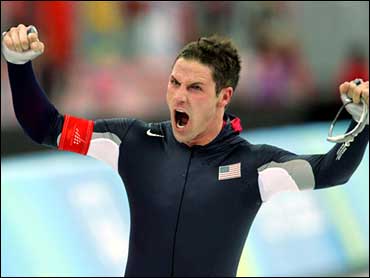 Before two-time Olympic figure skater Randy Gardner could nail the throw triple Salchow with his partner, Tai Babilonia, he had to see this complicated jump and landing in his mind.

"It worked almost instantaneously," the world pair champion, U.S. National pair champion and Los Angeles-based coach and choreographer tells WebMD. "Once you see it in your head, you can do it."

Gardner and other elite athletes — including those now competing in the XX Olympic Winter Games in Turin, Italy — often use visualization, goal setting, and refocusing to help them mentally prepare for important events. Some of these same techniques can also help weekend warriors improve their tennis game and help a person slim down, experts tell WebMD.

Though physical training and conditioning are obviously important to performance, emotional conditioning or mental-skills training can often help athletes stand out.

"Emotional conditioning is crucial because once you get to any level in sport — whether high school, Division I collegiate, the nationals, the Olympics, or even as a weekend warrior — everyone is pretty equal physically. It's those who can handle noise, stress, pressure, and distraction who are the ones that win," says Jenny Susser, Ph.D., a sports psychologist in the Women's Sports Medicine Center at the Hospital for Special Surgery in New York City.

"Emotional conditioning is the watchword of the universe," says Steven Ungerleider, Ph.D., author of "Mental Training for Peak Performance: Top Athletes Reveal the Mind Exercises They Use to Excel." "It's just as important as physical training," says Ungerleider, who is also a psychologist based in Eugene, Ore.

"Athletes that participate in mental preparation, rehearsal, and skills training tend to achieve a higher level of the elite status," Hogue says.

Tricks of the Trade

The visualization technique that Gardner describes is a staple in most emotional conditioning programs. But it's also important to learn how to pick up on the correct cues, says Dan G. Tripps, Ph.D. Tripps is director of the Master's in Sports Administration and Leadership program at the Center for the Study of Sport at Seattle University in Washington.

"In a figure-skating event, you need to concentrate on your partner and not pay attention to the crowd or the behavior of the judges," he says. "It's about narrowing your focus."

Anxiety, worry, doubts, fears, or butterflies can be reduced with this technique, he says.

"It can throw you when your opponent does something that you don't expect or when your body has an unusual reaction. But if you mentally plan for surprises — and execute them in, visualization exercises — then you are not flustered or confused by something that happens that's out of character," he says. For example, "if you fall in a preliminary skating run, you can remain poised, then refocus and perform better during the next important round," Tripps says.

"You need to work to strengthen your 'focus muscle' and figure out what is distracting you," Susser says. Some distractions are positive, she adds, but an athlete needs to determine what distracts him or her negatively and come up with a way to combat it — whether by tying their focus to their breathing or to somebody else on the team.

How can a person strengthen his focus muscle?

"If an athlete gets sidetracked by the crowd, I would work with the athlete on how to tune out the crowd and change their focus to the skates or the ice," she says. The goal is to "switch it to something that will improve your performance instead of distract you and decrease your performance."

Goal setting is key, whether you are Michelle Kwan or just want to play some golf over the weekend, Susser says.

"The No. 1 thing is to have a good, realistic goal," Susser tells WebMD. "You want it to be S-M-A-R-T." That stands for specific, measurable, action-oriented, realistic (but challenging) and time-sensitive.

"A goal is a road map. It's also a slam dunk in setting yourself up for success," she says.

"For the weekend warrior, goal setting and feedback-reward mechanisms that maintain motivation are important," Tripps agrees.

"Come up with things that tie in rewards to goals like an athlete would," he says, "For an athlete, awards are winning, medals, and newspaper coverage. But for the average person it can be a day at the movies with friends."

Expectation management is another important tool. "If you take a couple of minutes to mentally prepare yourself — that can help," Susser says. "The killer piece for a weekend warrior is expectation. It's really hard to go back after 20 years and play a sport again … and people don't prepare for that and get disappointed."

And you have to see it before you can do it, Ungerleider says. "If you are doing the luge, you have to understand the ice ahead of time," he says. "Weekend warriors can rehearse the tennis match or golf game or swimming competition in their mind. It works for everybody. It's about preparing and taking the time to do it."