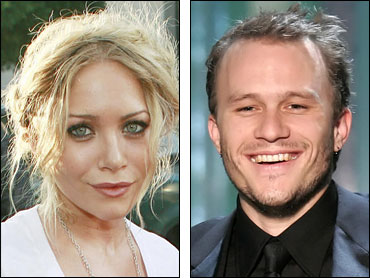 Olsen's lawyer has twice refused requests to have her sit down with investigators probing the death of the scene-stealing star of "The Dark Knight" earlier this year in a Manhattan apartment, said the official, who spoke on condition of anonymity because the investigation has not been concluded.

The official confirmed a report that Olsen - a close friend of Ledger who learned about the 28-year-old actor's death in a frantic phone call from a masseuse - wants a promise of immunity before she speaks to the Drug Enforcement Administration.

The activity demonstrates that federal authorities are still actively trying to figure out how Ledger got some of the drugs that killed him.

DEA investigators suspect the painkillers oxycodone and hydrocodone found in his system were obtained with phony prescriptions or other illegal sources, the official said. Oxycodone is sold as OxyContin and hydrocodone as Vicodin.

The other drugs that resulted in what the medical examiner called "acute intoxication," including anti-anxiety and sleeping pills, were prescribed legally by doctors in California and Texas, the official said.

Authorities have obtained a subpoena that could force Olsen to appear before a grand jury if negotiations with her lawyer fail, the official said. Other potential witnesses all have answered questions voluntarily, including doctors, Ledger's ex-girlfriend Michelle Williams and anyone who was in his apartment around the time of his death, the official added.

The DEA's New York office declined comment on the stalemate, first reported Monday by the New York Post. There was no immediate response to a message left with a spokeswoman for Olsen.

The masseuse discovered Ledger's body on Jan. 22 after the actor had completed filming his role as the Joker in the new Batman film.

Police say the masseuse spent nine minutes making three calls to Olsen before dialing 911 for help, then called the "Full House" actress a fourth time after paramedics arrived. At some point during the flurry of calls, Olsen, who was in California, summoned her personal security guards to the apartment to help, police said.

Shortly after the Australian-born actor's death, Olsen issued a statement that read: "Heath was a friend. His death is a tragic loss."