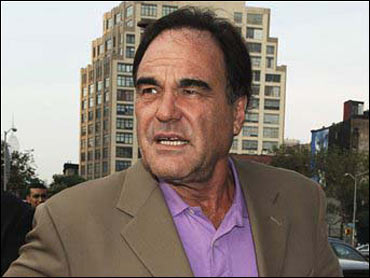 Oliver Stone, whose past films have explored the assassination of one president and the turmoil surrounding another, will turn his attention to a sitting president for his next film.

The Academy Award-winning director of "Platoon," "JFK," "Born on the Fourth of July" and "Nixon" told Daily Variety that his next project will be "Bush," focusing on the life and presidency of George W. Bush.

Josh Brolin, currently in "No Country for Old Men," would play the title role.

Stone was previously set to film "Pinkville," about the My Lai massacre, until the studio dropped the project.

With the Writers Guild strike putting many in-pre-production projects on hold, shooting on "Bush" could commence as early this spring, pending financing, and could be ready for release before the November election.

Stone told Daily Variety that the film offers a behind-the-scenes look at events that brought Mr. Bush to power. But he denied that he was interested in making an anti-Bush screed.

"People have turned my political ideas into a cliche, but that is superficial." Stone said. "I'm a dramatist who is interested in people, and I have empathy for Bush as a human being, much the same as I did for Castro, Nixon, Jim Morrison, Jim Garrison and Alexander the Great."

"I want a fair, true portrait of the man. How did Bush go from an alcoholic bum to the most powerful figure in the world? It's like Frank Capra territory on one hand, but I'll also cover the demons in his private life, his bouts with his dad and his conversion to Christianity, which explains a lot of where he is coming from. It includes his belief that God personally chose him to be president of the United States, and his coming into his own with the stunning, preemptive attack on Iraq.

"It will contain surprises for Bush supporters and his detractors."

The script has been kept under wraps, being developed under the titles "POTUS" (shorthand for Presdient of the United States) and "Misunderestimated."

Brolin, seen this year in "No Country for Old Men," "American Gangster" and "In the Valley of Elah," as well as the Quentin Tarantino double-bill "Grind House," is currently playing another politician: Dan White, who shot and killed fellow San Francisco figures Harvey Milk and Mayor George Moscone, in the Gus Van Sant-directed "Milk."

"Josh is actually better looking than Bush but has the same drive and charisma that Americans identify with Bush, who has some of that old-time movie-star swagger," Stone told Daily Variety.