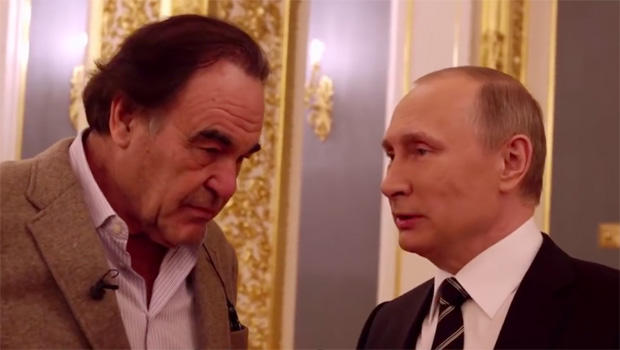 Oscar-winning director Oliver Stone is known for such films as "Born on the Fourth of July," "Platoon," "Wall Street" and "JFK." He also wrote the screenplays for "Midnight Express" and "Scarface." Over his career he has also interviewed controversial figures like Hugo Chavez and Fidel Castro.

For his latest documentary, the Showtime series "The Putin Interviews," Stone was granted extensive access to the Russian president. Stone interviewed Putin more than a dozen times over two years. No topic was off limits.

In one conversation from February 2016, Stone asked Putin about the candidates in the United States' presidential election:

Stone: "You do realize how powerful your answer could be; if you said subtly that you preferred X candidate, he would go like that [indicates nosedive] tomorrow, and if you said you didn't like Trump or something, right, what would happen? He would win. You have that amount of power in the U.S."
Putin: "Unlike many partners of ours, we never interfere within the domestic affairs of other countries. That is one of the principles we stick to in our work."

On "CBS This Morning" Monday, Stone said he first got to know Putin during production of his film about Edward Snowden, released in 2016, for which he interviewed the former NSA analyst in Moscow nine times. Stone also asked Putin about the Snowden affair and his point of view on it, "and one thing led to another."

Stone said he was invited by Putin to conduct the interviews.

"I think he needed to be heard fairly because I'm not going to be an editor; I'm going to let him speak," Stone said. "And his point of view is not heard; you don't hear him in Russian in the West; you hear a dubbed voice, and sometimes a dubbed voice can be very harsh."

Co-anchor Charlie Rose asked Stone for his measure of the man. "Former Secretary of Defense Robert Gates once said of [Putin], 'When I look at him I see a cold-blooded killer.' When you look at him after these two years, what do you see?"

"He reveals himself more in the film than anybody I've ever seen," Stone said. "If you think he's still a killer after you see [this film], that's fine, you know? You draw your own conclusion."

When asked again about Secretary Gates' assessment, and what he sees in Putin, Stone said, "A statesman who's very concerned with Russian national interests. He's represented those interests pretty consistently since about 17 years in power, and he's there to talk. He believes in talk, he believes in peaceful co-existence. In the whole two years, I never heard him bad-mouth anybody. About those candidates, he said very positive things about Hillary Clinton and positive things about Trump. But he didn't care about who would win. He says very clearly, 'I've had four presidents; the four presidents change, the policies remain the same.'"

"You sort of act as if you take what he says as fact," said co-anchor Norah O'Donnell.

"I'm interviewing him; why should he lie?" Stone said. "If he is, why should he omit something? I can understand if it's a state secret."

"The clip you just played -- Unlike many partners of ours, we never interfere within the domestic affairs of other countries -- I mean, that's a flat-out lie," O'Donnell said.

"If you say so. I'm not sure," Stone said. "I'm not here to argue with you, but I'm not there to make judgments on whether they hacked the election or not. It's a complicated issue."

"U.S. intelligence agencies believe that Russia did meddle [in the election]," said Rose. "He's alluded to it, said it might not have been the country, but somebody in Russia might have done it, a 'patriot.' Don't you … have some sense of whether the Russians meddled in the election?"

"I don't know, Charlie. Why would they?" Stone responded. "Miss Clinton is way in the lead, why would you even take the position that Trump was going to be a candidate? It didn't look like he was going to win. That was quite a shock. I'm of the belief that she did not win because she did not run a very good campaign."

With regard to the intelligence agencies' assessments of hacking, Stone replied, "There's a lot of confusion."

O'Donnell noted, "Just to clarify, it is the consensus of all U.S. intelligence agencies that they attempted to meddle in the elections; it is not the consensus that they influenced the outcome. Those are two separate things."

O'Donnell then remarked about Russian propaganda efforts, and about criticism Stone has received for his documentary, including from Foreign Policy, which wrote it "somehow manages to both spout the Kremlin line and fall back on the laziest American clichés about Russia"; and The Daily Beast, which called it a wildly irresponsible love letter" to Putin.

"Your mom used to tell you, you catch more flies with honey than with vinegar," Stone said. "My camera was on him for around 20 hours over four visits. There's a certain behavior. It's in the eyes. It's in the body language. You see it. You be the judge, if you think he's lying."

"We learn from this, that he wants to be our partner. He said very positive things about the United States. It's been a long time. He knows the president. You should listen."