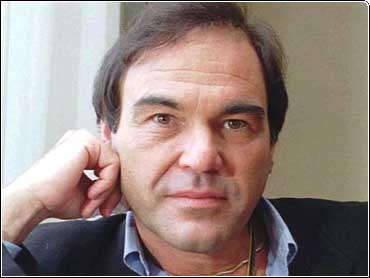 It seems clear that Oliver Stone has scored a touchdown with his new football drama Any Given Sunday. It beat out the competition to score first at the box office last weekend.

This film gave him his biggest film opening, but he tells The Early Show Anchor Bryant Gumbel it does not necessarily make it his best film.

"But I'm happy; it's a good opening all across the country from small towns to large towns, all genders and races," he says.

And he hopes the story is what is attracting people to the film. "It's got a lot of twists. It is a story of a very ambitious project. We try to do 12 life stories, you know, half black, half white," he explains.

"We did women and men. We tried to show what was going on behind the scenes and who owns the clubs, and the power of the corporation....And at the same time, to keep the action up," he adds.

Stone even says there is more action in Any Given Sunday than in Platoon, Born on the Fourth of July or any other movie he has made. He points out, though, that the film was done in an impressionistic style so that viewers don't have to understand football to enjoy it.

Stone, who has a reputation for making films with a historical bent like JFK and Wall Street says, "As America turns 2000, this nails where we are as a society. We're beginning more corporatized. The individual is, you know, being snuffed out. This film is about the reassertion, maybe in a corny way, but it's true."

When asked if this is his attempt to plant his flag in mainstream America, Stone says that is not his intention.

He notes that ever since he was a kid, he wanted to be involved in movies to be anonymous. "Theater was more you're in the front of the audience."

Directing "is like you're removed two, three steps. But the way things have gone, we've become under the spotlight. Sometimes it's all about me, like I'm Richard Nixon or I'm Jim Morrison," he says.

He also points out the difficulties he encountered in making the film, ranging from financial concerns and technical challenges, to the NFL's concerns that the film did not portray the league in a positive manner.

"The NFL is having its own problems right now....There is a lot of violence going on....We negotiated with them in good faith for six months, and it didn't work out. What happened was a lot of our product placement people were disappearing; that was really depressing," Stone says.

"People were working with the NFL; somebody told them not to work with us. So we were losing guys left and right. We had to struggle to find our own stadiums," he adds.

And though Stone did not want to comment on whether the league had pressured him to change the story, he says his film inot against the NFL.

(He notes that corruption no longer surprises him. "It's sort of become a way of life after JFK. After Nixon you get to a place where you accept it," he says.)

Instead Stone says this film, set in 2001, is about what football in his mind should be.

"We went back to the old colors. We tried to get the wools or semiwools they actually used, the reds and yellows. We designed the stadiums in different ways. We of course covered the film from the field...so that you're living it; you're in the action. No NFL TV will ever approximate that until they change the rules," he explains.

As for the future, Stone reiterates that he is not intending to go commercial mainstream, yet he says he wants to make pictures people like.

"That's what movies are about. If anything, movies in the '90s have become too sexualized and overanalyzed....It became too cut off from the American public. That's a shame because movies should appeal to everybody. There is no reason why we can't as a collective society enjoy a movie collectively," he says.