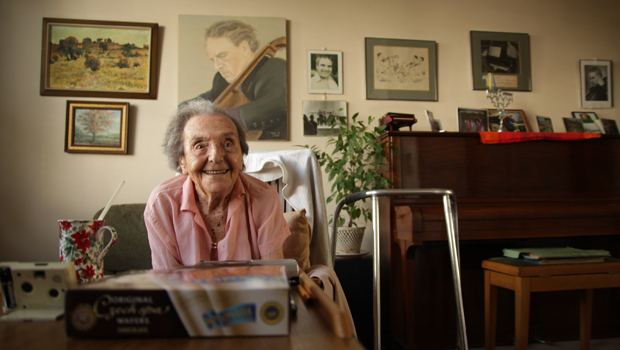 LONDON  - Alice Herz-Sommer, believed to be the oldest Holocaust survivor, died at age 110 on Sunday, a family member said. The accomplished pianist's death came just a week before her extraordinary story of surviving two years in a Nazi prison camp through devotion to music and her son is up for an Oscar.

Herz-Sommer died in a hospital after being admitted Friday with health problems, daughter-in-law Genevieve Sommer said.

"We all came to believe that she would just never die," said Frederic Bohbot, producer of the documentary "The Lady in Number 6: Music Saved My Life." ''There was no question in my mind, 'would she ever see the Oscars.'"

The film, directed by Oscar-winning filmmaker Malcolm Clarke, has been nominated for best short documentary at the Academy Awards next Sunday.

Herz-Sommer, her husband and her son were sent from Prague in 1943 to a concentration camp in the Czech city of Terezin - Theresienstadt in German - where inmates were allowed to stage concerts in which she frequently starred.

An estimated 140,000 Jews were sent to Terezin and 33,430 died there. About 88,000 were moved on to Auschwitz and other death camps, where most of them were killed. Herz-Sommer and her son, Stephan, were among fewer than 20,000 who were freed when the notorious camp was liberated by the Soviet army in May 1945.

Yet she remembered herself as "always laughing" during her time in Terezin, where the joy of making music kept them going.

"These concerts, the people are sitting there, old people, desolated and ill, and they came to the concerts and this music was for them our food. Music was our food. Through making music we were kept alive," she once recalled.

"When we can play it cannot be so terrible."

Though she never learned where her mother died after being rounded up, and her husband died of typhus at Dachau, in her old age she expressed little bitterness.

Caroline Stoessinger, a New York concert pianist who wrote a book about Herz-Sommer, said she interviewed numerous people who were at the concerts who said "for that hour they were transported back to their homes and they could have hope."

"Many people espouse certain credos, but they don't live them. She did," said Stoessinger, author of "A Century of Wisdom: Lessons from the Life of Alice Herz-Sommer, the World's Oldest Living Holocaust Survivor."

As a girl, she met the author Franz Kafka, a friend of her brother-in-law, and delighted in the stories that he told.

She also remembered Kafka saying, "In this world to bring up children: in this world?"

Alice married Leopold Sommer in 1931. Their son was born in 1937, two years before the Nazi invasion of Czechoslovakia.

"This was especially for Jews a very, very hard time. I didn't mind, because I enjoyed to be a mother and I was full of enthusiasm about being a mother, so I didn't mind so much," she said.

Jews were allowed to shop for only half an hour in the afternoon, by which time the shops were empty. Most Jewish families were forced to leave their family apartments and were crammed into one apartment with other families, but her family was allowed to keep its home.

"We were poor, and we knew that they will send us away, and we knew already in this time that it was our end," she said.

In 1942, her 73-year-old mother was transported to Terezin, then a few months later to Treblinka, an extermination camp.

"When I went home from bringing her to this place I remember I had to stop in the middle of the street and I listened to a voice, an inner voice: 'Now, nobody can help you, not your husband, not your little child, not the doctor.'"

From then on, she took refuge in the 24 Etudes of Frederic Chopin, a dauntingly difficult monument of the repertoire. She labored at them for up to eight hours a day.

She recalled an awkward conversation on the night before her departure to the concentration camp with a Nazi who lived upstairs and called to say that he would miss her playing.

She remembered him saying: "'I hope you will come back. What I want to tell you is that I admire you, your playing, hours and hours, the patience and the beauty of the music.'"

Other neighbors, she said, stopped by only to take whatever the family wasn't able to bring to the camp.

"So the Nazi was a human, the only human. The Nazi, he thanked me," she said.

The camp's artistic side was a blessing; young Stephan, then 6, was recruited to play a sparrow in an opera.

"My boy was full of enthusiasm," she recalled. "I was so happy because I knew my little boy was happy there."

The opera was "Brundibar," a 40-minute piece for children composed by Hans Krasa, a Czech who was also imprisoned in the camp. It was first performed in Prague but got only one other performance before he was interned.

"Brundibar" became a showpiece for the camp, performed at least 55 times including once when Terezin, which had been extensively spruced up for the occasion, was inspected by a Red Cross delegation in June 1944.

The opera featured in a 1944 propaganda film which shows more than 40 young performers filling the small stage during the finale.

In 1949, she left Czechoslovakia to join her twin sister Mizzi in Jerusalem. She taught at the Jerusalem Conservatory until 1986, when she moved to London.

Her son, who changed his first name to Raphael after the war, made a career as a concert cellist. He died in 2001.

"She was a real optimist," she said, adding that the pair used to play Scrabble together frequently until Herz-Sommer's eyes failed her. "She was feeling very unwell and she went to the hospital last Friday. I think she had enough."

She added that Herz-Sommer lived a modest life, and would probably balk at the media attention directed at her death.

"She didn't think of herself as anybody very special," she said. "She would hate any fuss to be made."