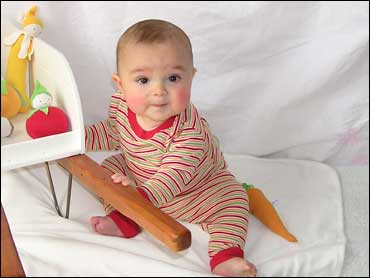 Children born to older dads may be much more likely to have autism than those with younger fathers.

A new study shows that children of 40-year-old to 49-year-old dads are nearly six times more likely to have autism than children of men under 30, regardless of the mother's age.

The researchers say the study provides the first convincing evidence advanced paternal age is a risk factor for autism.

Autism is a chronic disorder that emerges by age 3 and is associated with behavioral disturbances such as social and language abnormalities, and repetitive patterns of behaviors.

The prevalence of autism and related autism spectrum disorders has increased dramatically, rising from 5 to 50 cases per 10,000 children over the last 20 years.

Researchers say some of that increase may be due to better detection and awareness of the disorder, but it may also reflect a true increase in incidence due to yet unexplained factors.

Older maternal age has been linked to an increased risk of developmental problems in children, but researchers say few studies have looked specifically at the role of the father's age in autism risk.

In this study, researchers looked at more than 300,000 17-year-olds assessed medically and psychologically by the military draft board in Israel during the 1980s. They checked to see whether the age of the father contributed to the risk of autism in the young men and women.

Information on the age of the mother was also available for more than 100,000 of the 17-year-olds.

The results showed that advancing age among the fathers was associated with an increased risk of autism, even after adjusting for the year the teens were born, their socioeconomic status, and the age of their mother.

Overall, the risk of autism was 5.75 times greater among children born to men aged 40 to 49, compared with those born to men under 30.

Age among mothers was not associated with autism after factoring in the effect of the father's age.

Researcher Abraham Reichenberg, PhD, of the Mount Sinai School of Medicine in New York, and colleagues say more work is needed to confirm these results.

One possible explanation for the link may be spontaneous mutations in sperm-producing cells or alterations in gene expression associated with advancing age among fathers, the researchers say.