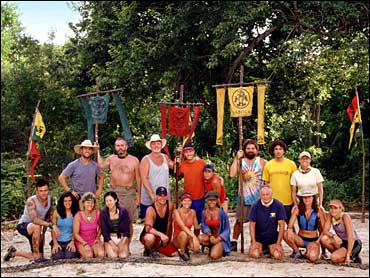 The idea of bringing past "Survivor" contestants back to primetime has been a long-awaited wish for fans of the reality show that became a phenomenon. And now it's finally here, The Early Show correspondent Tracy Smith reports.

Since "Survivor" first set sail in the summer of 2000, 112 castaways have competed over the show's seven seasons. Eighteen of them have been invited back for "Survivor: All-Stars." From season one, Jenna Lewis is joined by "Survivor"'s original alliance of Susan Hawk, Rudy Boesch and the show's first millionaire, Richard Hatch.

"I thought it would be tougher initially," Hatch says, "And, you know, I have no ego. But I'm thinking maybe I'm wrong, maybe the game is going to be even easier because at this point, I know the contestants. I know those little game pieces that I'm going to be pushing around the board."

From the Australian Outback game are winner Tina Wesson and runner-up Colby Donaldson, as well as Amber Brkich, Alicia Calaway and the woman known as the black widow, Jerri Manthey.

Manthey points out, "The last time I didn't know what I was into and I got cranky."

Buchanan says, "My word is my bond."

Season four brought it back to the beach, with "Survivor: Marquesas" and contestants Rob Mariano and Kathy Vavrick O'Brien.

Mariano says, "I know these people and how to play and know the difference between winning and losing."

And the "she-devil" Huang humbly says, "I don't know if I can beat all the winners but to get the chance to play against all of them is amazing."

From "Survivor: The Amazon," Jenna Morasca made the cut, as did Rob Cesternino, who points out, "You don't always get a second chance in life, but I do get a chance to rewrite history."

Finally from the "Survivor: Pearl Islands," perhaps the most popular cntestant ever, Rupert Boneham.

He says, "I went into it wanting to show I was the best 'Survivor.' This might be the platform for me to show them all."

Not only will the faces look familiar to "Survivor" fans, but so will the challenges and the location. It's in the same place as the last installment, Panama's Pearl Islands.

Why the Pearl Islands again?

Show host Jeff Probst says, "Well, the whole season for the 'All-Stars' is about familiarity, so we're going to have familiar challenges, obviously familiar survivors, so we picked a familiar location. This is one of our favorites."

Another proven success on Pearl Islands was the brief summation of three tribes, which is how the all-stars will be divided to begin the game, a game in which past winners will ultimately have to lose.

So whose torch is Probst most looking forward to snuffing?

"Probably Richard Hatch's," he says. "He's one of the few people whose torch has not been snuffed and probably the guy who needs it most."

Richard Hatch knows he's going in with a huge target on his back. But remember last season when some of contestants voted off returned to the game and one of them, Lillian Morris, nearly won? Hatch is still confident.

The decision on who was invited to the All-Star game was done in a sneaky way. Smith reports the producers asked all 112 if they were available, then ruled out people who weren't, looked at everybody else, paired them up and decided whom to ask. Two said no.

Strangely, they didn't invite all the winners back.